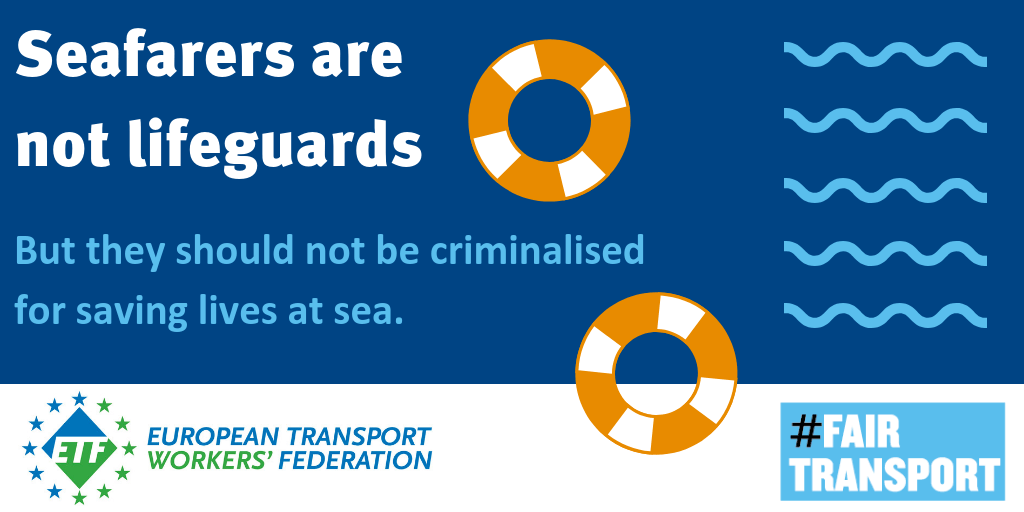 Although sea rescue is an international obligation, the number of casualties in the Mediterranean has been extremely high since 2014. Figures from the United Nations High Commissioner for Refugees (HCR) are very revealing: 2,216 death and missing in 2018; 3,139 in 2017; 5,096 in 2016; and 3,771 in 2015. Nevertheless, due to the specificity of the maritime environment, the law requires any ship master to render assistance to any individual in distress at sea, regardless of that person’s nationality, status or of the circumstances he/she was found in.

Seafarers’ trade unions from various European countries, hereby emphasise our adherence to the traditions and ancient ideals of our profession: rescue is a fundamental obligation, regardless of the person and his/her circumstances. We take pride in rescuing whoever is in distress in the vicinity of our ships. Rescue, therefore, is not part of migration policies and must not be tailored by it.

We resist any attempt to criminalise masters and crew of ships involved in rescue operations. On the contrary, they are acting pursuant to their obligations emanating from international law. And the governments that are refusing to provide sufficient resources to rescue people are violating those laws.

The purpose of amendments to the SOLAS Convention regulation 33 (see below) and the SAR Convention (Maritime Search and Rescue of 1979) chapter 3.1.9 is to secure the continuity and integrity of SAR services, to ensure people in distress at sea are rescued while minimising the damages those interventions may cause to the ships concerned. Therefore, they require that the contracting States:

Despite the clarity of such obligations, criminalisation of sea rescue is increasing. Many legal proceedings – particularly on the grounds of illegal traffic of migrants – have been initiated against sea masters and crew, fishermen or NGOs engaged in periodic rescue operations. After years of legal procedures, they have all been acquitted, which demonstrates the abusive nature and dissuasive purpose of these trials.

We call upon the European Union and its Member States to regulate, on grounds of solidarity, the prevention of such criminalisation. This is essential to ensure proper implementation of the Palermo Protocol against the smuggling of migrants (2000), which has been ratified by the European Union and its Member States. As was recalled at the 2015 Conference of the States Parties to the Protocol: “States should ensure that the legislative frameworks in place provide sufficient clarity to ensure that charges may not be pressed against those who fulfill their obligation of rescue and preservation of life”.

United Nations Convention on the Law of the Sea of 1982

The UNCLOS Convention states that “Every State shall require the master of a ship flying its flag, in so far as he can do so without serious danger to the ship, the crew or the passengers:

Safety of Life at Sea Convention of 1974

The SOLAS Convention provides for the “master of a ship at sea which is in a position to be able to provide assistance on receiving information (2) from any source that persons are in distress at sea, is bound to proceed with all speed to their assistance, if possible informing them or the search and rescue service that the ship is doing so…” (Chapter V, Regulation 33(1)).