Automation in ports: dockers take action in Rotterdam to defend their jobs

Expressing their disagreement with the recent actions of the Port Authority, dockers in the Port of Rotterdam took part in a protest yesterday. The dockers’ union FNV Havens alleges that the Authority has violated the agreement that guarantees additional jobs for dockers in the port. 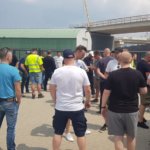 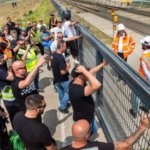 Their claim comes from the Social Contract that has been in effect since 2015 when Dutch dockers’ unions finalised their negotiations concerning the Maasvlakte terminals in Rotterdam. The contract was signed by terminal operators, the lashing companies, and the unions. Its duration is from 1 July 2015 until 1 July 2020.

The contract includes several references to the future automation of the terminals and states that there would be no automation of the Container Exchange Route (CER). Instead, dockers would work on the route, under the collective agreement signed with FNV.

The CER is planned to be 17 kilometres long, and it will connect container terminals Maasvlakte I and Maasvlakte II. The forecasted need for workers on this route was between 80 and 100 full-time employees on an annual basis. These jobs are significant for the dockers, as they can offer some relief to those that have already done years of hard physical work in the port. The Social Contract also states that if the port authority wants to automate the CER, they need to inform the union at an early stage.

Despite the agreement being very clear, the Port Authority recently started taking actions that go against it. First of all, it took much longer than first predicted to finish the route – even though dockers should already be working there, it still hasn’t been finished. In addition to that, the Port Authority now decided that they would like to automate the route, and even told the unions that they don’t care about the Social Contract because it is only valid until the end of the month.

FNV Havens disagrees – one of the main provisions of the contract is that dockers will get to work on the route, and this has never materialised because the Port Authority has been taking so long with building it. Just because they have notified the dockers of their intentions, that doesn’t cancel out the agreement on jobs.

Following this complete disregard of the Social Contract by the Port Authority, dockers in Rotterdam took part in a protest yesterday. While in some cases, automation and digitalisation in ports can mean less strain for dockers and supports them in their work, this is not the case here. Dockers will continue to fight for their rights and the respect of collective agreements, preventing the destruction of their jobs.