Automation in transport: social costs and benefits must be fairly shared!

The transport sector has always been at the forefront of technological innovation, and transport workers are used to learning and adapting to the changing nature of their work. However, the current wave of automation may be different. How should workers and their unions respond? ETF General Secretary Eduardo Chagas was invited a European Commission conference about automation in transport, where he spoke as part of the opening session – alongside EU Transport Commissioner Violeta Bulc and the Chair of the European Parliament Transport Committee, Karima Delli. Here we publish the text of his speech:

I thank the opportunity for the ETF to address this event. 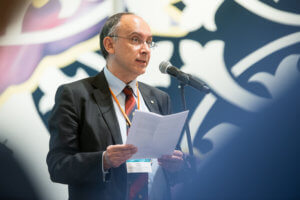 Over the decades transport workers have adapted to work with new technologies, they have always been used to learning new skills and adapting to the changing nature of work in transport. For the ETF the key in dealing with technological innovation is to make sure that the workers and their unions are behind the processes when new technologies are introduced. We already have some examples of automation agreements in transport, that set how technology should be introduced and how its benefit should be shared.

We are not against automation per se. But the introduction of automated technologies needs a business case. This element is missing in debates on automation. We must take a step back and reshape the way we are dealing with automation in transport. We must ask if and when new technologies are bringing any advantage to people, to economies and to societies at large. Debates are often triggered and led by equipment producers, which is why it is often taken for granted that they only come with advantages.

Moreover, debates generally underestimate the social implications of such developments. The nature of jobs in transport is changing deeply, and this is an ineluctable process, but there are a few elements that should not be forgotten:

We need to figure out new ways to tackle these issues:

We must also beware of new forms of social dumping! With remotely controlled equipment, vehicles, etc, control rooms can theoretically be moved everywhere else in the world. This is already happening in Australia right now, and negotiations in APM Terminal Maasvlakt II in Rotterdam broke down as the management refused to agree on a clause on this issue. But we also saw good practices emerge from a joint statement in the Air Traffic Management sector, where employers agreed with us on a set of guidelines for conducting change processes in the sector with the involvement of the workers representatives. These guidelines apply especially when introducing new technologies; and in the port of Antwerp an agreement has been signed last August guaranteeing proper processes of information and consultation in case of the introduction of new technologies in the port.

The modernisation of the transport sectors cannot be seen as the introduction of modern ways to pursue the old objectives and practices to maximise profits at any cost. Some online platforms for passenger transport or parcel delivery are the perfect tool for the long standing neo-liberal ambition to get rid of a salaried workforce and its inherent costs by using zero hour contracts. Don’t count on the ETF to accept those practices for the sake of them being modern and cheap.

Similarly, do not expect trade unions to applaud or do nothing when the introduction of automation is accompanied by union busting, driving down working conditions or avoiding collective bargaining and representation.

Everyone must take the responsibility: but in particular the social costs of automation should be shared by all those who hold responsibility for it! And the benefits should not be taken only by the few who run the businesses but rather be shared with those who work for them.

We are approaching the next European elections: job losses due to automation are being used by populist right-wing parties to attract voters. There is thus an urgent need for policymakers to seriously tackle the issue through policies and legislation, dialogue, etc, to get the message across that the market dogmas can not supersede the need to ensure fair treatment of the workers, the dignity of labour and that the human element is respected and put in the centre of policies.

These few ideas are part of the manifesto the ETF will present to the political groups and candidates to the elections for the European Parliament: we need an engagement with fair proposals to achieve Fair Transport in Europe.

The European Union will be social or it won’t be!