Commission’s SES2+ proposal: behind the greenwashing, a further push for cost reduction and liberalisation

The ETF calls on MEPs to reject the European Commission’s greenwashing narrative surrounding the proposed Single European Sky (SES2+) reform. The proposal simplifies and oversells the potential positive effects for the environment while deliberately ignoring the reform’s adverse social impacts.

From the beginning, the SES2+ proposal has been branded as a sustainable solution that will “modernise the management of European airspace”. When observed closely, though, suggested actions lack solid evidence to support these claims and instead revert to the old misguided belief that further liberalisation is the universal cure for the sector’s ills.

The SES2+ proposal is currently being discussed by European Parliament’s political groups, opening the space for real debate about the aims of the reform and its effects on the environment and workers. Unfortunately, the European Commission’s framing of the proposal diverts the attention from the serious changes that are being pushed through with little discussions, including cost reduction, liberalisation and further fragmentation of the European air traffic management system.

“A quality European air traffic management system is critical to the safety and connectivity of the continent. The liberalisation process introduced by the Commission’s SES2+ proposal will harm safety and will never be accepted by workers. It’s a step away from social sustainability,” said Eoin Coates, ETF Head of Aviation.

At the same time, the European Commission’s greening claims are built on shaky ground. Many of the proposed solutions are either unlikely to have the desired effect because of existing airspace restrictions and practices or would need to be supported by additional measures that the Commission does not foresee.   The ATM industry cannot be held responsible for the behaviour of the entire aviation sector.

There are ways for the aviation sector to improve its infamous environmental track record, but the current SES2+ debate does not address them. Issues like the development of Sustainable Aviation Fuels (SAFs) and the development of hydrogen technology have a scientifically proven benefit on aviation’s CO2 emissions. Instead, SES2+ pushes for cost reduction and liberalisation that, unless stopped, will result in an unsustainable, unstable, low cost, low quality and fragmented ATM system.

The ETF calls on MEPs to be cautious in the ATM reform debates and reject the SES2+ greenwashing. By doing so and amending the harmful proposals, they can protect the European ATM system and ensure the sector’s environmental and social sustainability. 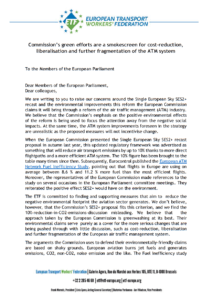