Death threats, a police raid and possible lawsuits: it’s time for the Romanian government to stop intimidation tactics and engage in social dialogue

The workers of Bucharest metro, represented by trade union USLM, have been protesting for weeks against the company’s plans to cut jobs and salaries. The Romanian government’s response has been to discredit the union leaders and threaten the protesting workers with lawsuits.  In a statement today, the ETF Executive Committee condemns the attacks and calls on the Romanian government to engage in genuine and systematic social dialogue.

Bucharest metro company, Metrorex is solely owned by the state, with the Romanian government playing a crucial role in its management. Despite receiving external and EU funds in recent years to develop the metro network, the company continues to neglect working conditions and occupational health and safety.

As it stands, the metro infrastructure is completely obsolete and is far from doing its workers justice. To cite one of many examples, metro workers spend around 8 hours per day breathing toxic fumes simply because the metro ventilation systems are built at street level.

It then comes as no surprise that metro workers’ union records report an average number of over 20 work-related Bucharest metro deaths every year. Yet, Metrorex has not fulfilled any of its plans to improve working conditions in the last five years.

According to the union’s estimates, in 2020 alone, 20 newly retired workers died because of their long-time exposure to an unhealthy workplace. Despite crippling evidence, policymakers continue to systematically ignore repeated trade union calls for the legal recognition of occupational diseases in the Bucharest metro. Quite the contrary.

Without any prior consultation with USLM and despite the acknowledgement of understaffing issues by the Transport Ministry last year, the company has announced layoffs and pay cuts.

For weeks, USLM tried in vain to meet with the Transport Minister to discuss these plans. Instead, the government launched a personal attack on trade unions, culminating in death threats on social media targeting their President, Ion Radoi.

In protest of the company’s announcement, metro workers went on strike on March 26, which led to Metrorex agreeing to open discussions with USLM and stop layoffs. However, the Transport Minister added fuel to the fire, labelling the strike as “terrorist”, the union as a “mafia” and threatening workers with legal proceedings. On April 16, police raided the union’s office.

Sadly, the current situation in Bucharest metro is one example of many illustrating the general deterioration of social dialogue in Romania. The government also refuses to consult unions on its policies, including the post-COVID National Recovery and Resilience Plan.

Following earlier solidarity actions, in a statement issued today, the ETF underlines that denying trade unions the right to structured dialogue on working conditions goes against the most fundamental human rights listed in the European Pillar of Social Rights.

For the ETF, Romania, as an EU Member State, must adhere to European values and stop attacking its key workers. It is high time for the Romanian government to lay down arms, reconcile with unions and restart social dialogue.

Our statement can be downloaded to your right in English, French and German. 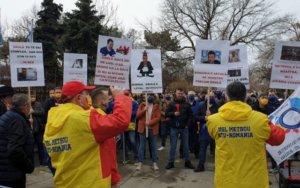