On 10 January the Transport Committee of the European Parliament will hold a hugely important vote. Their agreement about the EU Mobility Package will have a major impact on bus and truck drivers’ work and rest schedules, on their wages, and on the safety of all road users in Europe. Ahead of this vote, the ETF calls on MEPs to keep the current EU rules on driving and rest time. Only this way can they guarantee safety and fair working conditions for millions of EU citizens.

With EU elections coming up in May 2019 we’ll be sure to inform the public about how MEPs have voted. Will they choose safety and fair working conditions?

The ETF and its affiliated trade unions across Europe demand that MEPs reject any reforms that mean longer driving times. They must also reaffirm that drivers spend their long week-ends in adequate accommodation and not in vehicle cabins, and make it legally clear that drivers working abroad are paid the wages of the EU countries where they work.

Check out our this video showing our actions across Europe this week, and read more about them below!

Belgian trade unions BTB/UBT and ACV Transcom organised border actions and reached thousands of road users and bus and truck drivers with leaflets exposing the issues at stake relating to the upcoming European Parliament vote. Total traffic blocks, slow-down of traffic flow and parking area actions were organised in Meer, on the access roads to the E17 motorway connecting Antwerp and Rotterdam, in Rekkem on E17 motorway linking Belgium to France, and in parking areas in Zonhoven and in Maasmechelen. MEPs Kathleen van Brempt and Agnes Jongerius joined the action to show their support. 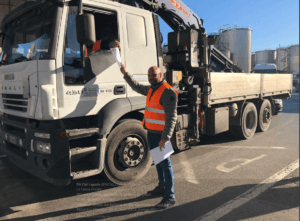 1300 truckers passing through the port of Genova and resting in surrounding parking areas were handed leaflets setting out the risks for their working conditions in Thursday’s vote. Activists from Italian unions FILT CGIL, FIT CISL and UILTRASPORTI prepared leaflets in Italian and 5 Eastern European languages, to distribute to drivers from all over Europe. Sadly drivers will have a lot less rest if MEPs reach a danergous compromise on the EU Mobility Package. Some proposals say they should have to work for 3 weeks with just two days rest (instead of 2 weeks with 3 days rest under current rules).

This was followed on 8+9 January with leafleting actions towards drivers and the public in Milan, Turin, Venice, Genoa, Bologna, Florence, Ancona, Rome, Naples and Bari.

Polish union NSZZ Solidarność has sounded the warning about driver fatigue, which would be greatly increased by a bad EU Mobility Package. Union activists spoke to drivers at the container terminals of Gdynia and Szczecin, and hung posters in local and lon-distance buses. They also went to supermarkets to speak directly to the public about the upcoming vote. After all, passengers and other road users are also in danger if new rules force drivers to work longer without a rest. It’s vital that everyone know what MEPs are about to vote on!

It is not only truck drivers who will be affected by the Mobility Package. International bus and coach drivers could also face longer hours with less rest if MEPs reach a bad deal on Thursday. That’s a real danger for passengers. Unite the Union went to London’s Victoria Coach Station to inform drivers and passengers about the upcoming vote and what it could mean for road safety in Europe. 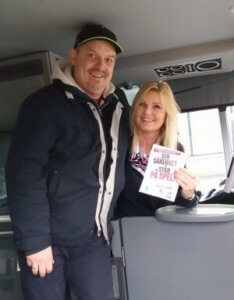 Activists from Swedish ETF affiliate Kommunal braved the snow of an early morning in January to inform passengers and drivers all over Sweden about the upcoming vote. More than 25 bus stations and various company depots were visited by Kommunal reps, in cities including Malmö, Stockholm, Uppsala, Umeå, Kalmar, Karlstad, Örebro, Kristianstad, Helsingborg, Nyköping, Östersund. In total, thousands of passengers and drivers – all eligible to vote in the EU election – learned about Thursday’s vote and what their MEPs are voting on.

Brussels North is one of Belgium’s busiest train, bus and coach stations. International bus drivers and their passengers could face terrible consequences from a poorly designed Mobility Package, which would mean more tired drivers on Europe’s roads. Activists from Belgian Union BTB/UBT spoke with Flixbus drivers and handed leaflets about the upcoming vote to passengers. 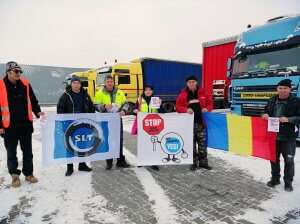 Romanian trade union SLT visited the border crossing at Vama Bors to explain the risks of a bad Mobility Package to road users, bus and truck drivers at the crossing in Northern Romania. 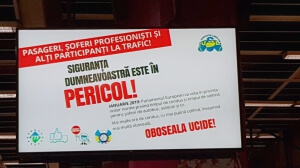 ATU, a Romanian ETF affiliate, is making sure that travellers in Bucherest know what is happening in Brussels this week. They are distributing leaflets to passengers using the public transport – metro, tram, bus – and the messages will be displayed on monitors in all stations of the Bucharest metro system. Thanks to this massive mobilisation and outreach, around 700 000 people will see our message and learn about MEPs’ crucial decison this week. 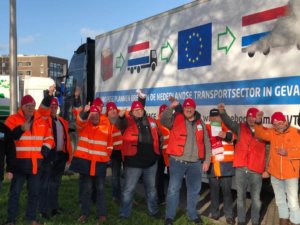 FNV, an ETF affiliate union in the Netherlands, took action against dangerous proposals to reform the EU road transprt sector. Workers and activists gathered at the Hazeldonk border crossing on the A16 and handed leaflets to passing drivers.

Workers and unions will stop drivers at the Ventimiglia border crossing between Italy and France, to tell them about the vote and what it means for road users.

Karl Delfs from our Austrian affiliate vida had a clear message for MEPs voting on the Mobility Package: please do not vote for rules that will mean truck drivers have to work three weeks before they have a proper rest. Do not vote for a reduction in rest time. That is best protection against deaths on Europe’s roads. 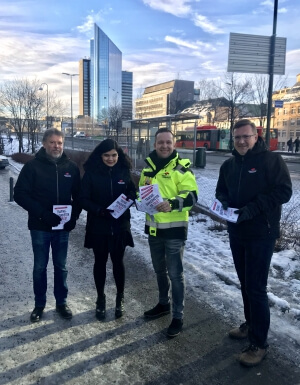 Yrkestrafikkforbundet distributed leaflets in Norwegian, stating that they against any chnages to current driving and rest time rules. They distributed nearly five hundred leaflets at the main bus hub and to truckdrivers in Oslo, informing passengers and drivers of the dangers that fatigued professional drivers represent.

An ETF international delegation will visit Brussels to attend the European Parliament to speak with MEPs and witness the vote in Brussels.