Women workers face terrible violence and harassment and transport workers are some of the most affected. The solution will be multifaceted, but international agreements can send a clear signal that the situation has to change and encourage action. At next week’s centenary conference of the International Labour Organisation (ILO) in Geneva, we are calling for an ILO Convention on violence and harassment in the world of work. Indeed, this has long been a demand.

To support this campaign, today our Acting General Secretary Livia Spera sent letters to the European Commission and the Romanian Presidency of the European Council urging them to play an active role in the development of an ILO Convention. Similar letters were sent by CFDT (France), Unite the Union (UK), and ATU Romania (Romania) to their respective governments.

RE: ETF supports an effective ILO Convention on violence and harassment in the world of work 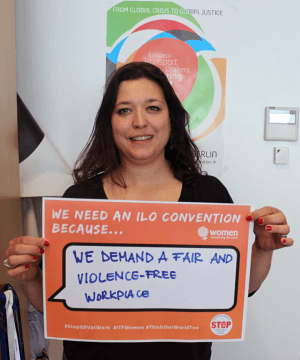 On behalf of the European Transport Workers’ Federation (ETF)[i], I am writing to urge the European Commission to support the development of an effective ILO Convention on violence and harassment in the world of work at the centenary ILO Conference commencing next week in Geneva.

There is a need for a specific international legal instrument focusing on violence and harassment, including gender-based violence, in the world of work, as no such instrument currently exists. Whilst some existing ILO instruments refer to violence and/ or harassment, these instruments do not define what is understood by violence or harassment, do not provide guidance on how to address its various forms and do not cover all workers.

Gender-based violence – the situation in the European Union

Violence against women in the EU is a problem of epidemic proportions. One-third of women have experienced sexual and/or physical violence and more than 50% experienced sexual harassment.[ii] Whilst both women and men experience violence and harassment in the world of work, unequal status and power relations in society and at work often result in women being far more exposed to violence and harassment. According to a report by European Union Agency for Fundamental Rights is “violence against women, and specifically gender-based violence that disproportionately affects women, an extensive human rights abuse that the EU cannot afford to overlook”[iii].

Violence against women at work in transport in the European Union

The transport sector is still a male dominated industry. Only about 20% of all workers are women. This percentage is increasing, and women are becoming an important part of the workforce in transport. However, women predominate work in service-related and administrative jobs and often in more flexible work arrangements and in part time jobs. Whereas men mainly work in jobs such as drivers, pilots, technicians or in occupations involving physical work and a heavy workload.

Many women respondents to the survey spoke of a pervasive culture of sexual harassment and sexual intimidation. This takes the form of repeated, hostile and offensive verbal, non-verbal and physical forms of violence, including sexual harassment. These acts of violence are part of a culture where male colleagues, supervisors and managers believe they have an entitlement to abuse women, and if women “can’t cope they should get out”. This culture has resulted in many women being silenced and very isolated at work.

“A few years ago, when I worked as a flight attendant I was a subject to constant sexist jokes and invitations with sexual subtext, considering it part of the job. Although dealt with the situation successfully, I did not like it at all.” — Civil aviation worker

The second form of violence at work reported on in the survey is violence and harassment from customers (‘third-party violence’). The survey revealed alarming incidents of violence against women transport workers by customers. Risks of violence increase when a woman works alone and when they face customers, for example, in ticket checking, driving buses and trams, or working in ticket offices.

“All staff suffer abuse from customers but the abuse women have to put up with is more sexual and revolting.” — Railway worker

Violence against women workers in transport has damaging physical and psychological impacts. Many respondents spoke of a loss of confidence and self-worth as a result of violence at work. This has also a major impact on retention of workers. Several women stated that they wanted to leave their jobs but were unable to do so as they were concerned about not finding another job; others felt that they had to get on with the job or leave the job.

“Seriously depressed, 11 months off work, felt stressed and very nervous anxious… I had to leave the Merchant Navy after 17 years.” — Seafarer

The ETF survey shows clearly, if women do not feel safe in their workplace they do not stay in their jobs. An ILO Convention and Recommendation would give a push to effectively address the phenomenon and make a real difference in the workplace.

The definition of worker: The ETF believes that everyone should be protected from violence and harassment, regardless of whether they have a contract of employment or a similar contract for services, work in the formal or informal economy, or are seeking work or performing a traineeship, apprenticeship or internship. We appreciate the Office proposal, which clarifies this within the scope of the draft Convention, rather than creating a definition of worker.

The listing of specific categories of persons who may be particularly exposed to violence and harassment in the world of work: As concerns a specific new provision of the Recommendation aimed at supplementing Article 7 of the draft Convention, The ETF is mindful that re-opening the discussion on a list could again risk a polarising and inconclusive discussion, which we would prefer to avoid. The ETF cannot support a list that would not include LGBTI+ workers. The ETF, however, can accept compromise language that would not list specific categories of workers.

We thank you in advance for taking into account our views. We remain at your disposal for further questions and clarification.

[v] ETF (2017): Violence against women at work in transport: https://www.etf-europe.org/violence-against-women-transport-workers-etf-study-reveals-the-facts/