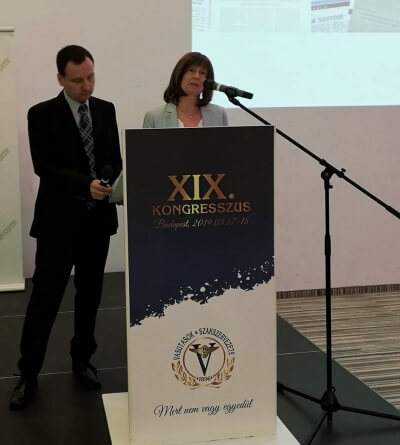 She appreciated VSZ’s role as a vital force for workers’ rights in a region and a country where trade unionism is not easy. She highlighted that VSZ is a strong partner at European level, with VSZ’s Róbert Zlati serving as the Vice-President of ETF’s Railways Section. She thanked all the VSZ workers for their support, for voicing demands from Central and Eastern Europe on the international level, and for successfully representing the region in ETF structures over the years. Moreover, she offered solidarity to the Hungarian trade union movement in these difficult times and reminded how important it is to work together to protect railway workers from liberalising forces in the EU.

Furthermore, the ETF Deputy General Secretary encouraged all VSZ colleagues to take part in the upcoming European elections and vote for those representatives who speak up for workers. She highlighted that it is more important than ever to elect those who are dedicated and willing to fight for worker’s rights and voice their demands for a social Europe. Amongst the most burning issues in the transport sector, she mentioned the fight for decent working conditions, the right to strike, equal pay, and Fair Transport for all.

She reiterated that it is important that every railway worker and every trade union member participates in the European elections and gives his or her vote to those who support trade union demands.

She reminded that ETF stands united and in solidarity with the Hungarian colleagues and wished them a successful Congress that strengthens workers’ power.