The ETF is shocked and saddened to learn of the senseless and heinous assault on Sunday, July 5 that lead to the brain death of Philippe Monguillot, a bus driver in Bayonne.

The European Federation of Transport Workers and its Urban Public Transport Committee express their support for Philippe’s family, friends and colleagues.

Philippe was attacked by several individuals after he demanded that they wear a protective mask and present valid travel tickets.

For the ETF, such an act is incomprehensible. It is high time that companies wake up and do everything they can to protect their employees. The drivers of the Chronoplus bus network have asserted their right of withdrawal to denounce this violent act. We stand by them.

We understand that the attackers have been taken into police custody and an investigation is underway. We hope that these investigations will lead to the aggressors being brought to justice and punished.

For us, it is essential that management quickly implement measures to ensure the safety of drivers.  Companies must value lives over profits. 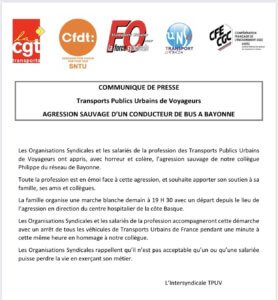 The acts of aggression and the disrespect of passengers towards staff, already very present in the past, are increasing tenfold. Recently, due to coronavirus, staff have to undertake, in addition to their other responsibilities, the responsibility of ensuring that protective measures such as wearing a mask and social distancing are maintained. Employers should not hold them accountable and ask them to interfere when these measures are not followed. We have made known and continue to make our claims known to the European Institutions! Transport workers cannot pay the price for this crisis!

We hope that the management of the company in question and all transport companies will do everything in its power to ensure that such acts of aggression do not occur. Our drivers must be protected!

French unions CGT, CFDT, FO, UNSA and CFE CGC  are presenting a united front and have organised a march in honour of Philippe Monguillot today. The march will start at 7:30 PM. Trade Unions and urban public transport workers will support this march with a halt to all urban public transport vehicles in France for a minute of silence in tribute to their colleague. French unions remind everyone that it is unacceptable that an employee should lose their life while doing their job.