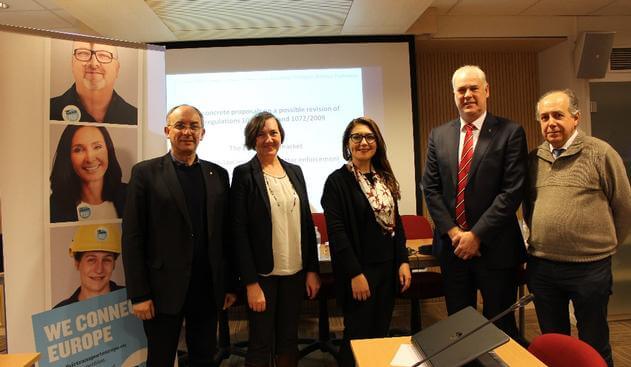 On 10 January 2017, in an event addressing EU transport attaches, ETF shared its concrete views and proposals on a possible revision of cabotage and access to occupation rules in road transport. Eurocontrole Route (ECR) complimented this with a presentation on risk-rating of road transport undertakings, a legally required instrument that stays at the heat of ‘smart’ enforcement.

The event, “The EU haulage market – between law revision and better enforcement” put across recommendations for law revision together with a strong message for better enforcement of the current rules in a sector whose law-compliance and labour standards are on a constant decline. The European Commission’s preparation to launch a road initiative has induced an increase of calls for a full respect of the current EU road-specific rules and for minimum but effective legal amendments.

ETF and the European enforcement community represented by the ECR have been fervent promoters of this approach.

Illegal, unsustainable practices in the EU haulage market have expanded in the past decade, allowing  ‘bad players’ to set the norm in the sector. A growing part of the industry resorts to social fraud such as employing professional drivers on pay levels and conditions of their country of origin while dispatching them to permanently work in countries with much higher standards.

Letter-box companies stay at the core of these practices despite a specific EU regulation aimed at eradicating them. ETF developed tangible proposals on how to effectively remove these fake constructions and to ensure a true level-playing field for all players in road transport. It also presented at the event a more enforceable definition of cabotage to facilitate the elimination of distortions in domestic labour and haulage markets of Member States exposed to this type of transport.

Regarding the EU legal set of rules on posting of workers and the so called principle of host country guaranteeing the pay and conditions of the country of work rather than the ones of the country of origin, ETF is of the opinion that they are easy to enforce and control.

“In shaping up the future road initiative, the European Commission has to regain its credibility among all Member States by making viable proposals to render the EU haulage market and make it functional, sustainable and equitable for all. During our campaigns – most recently the ETF campaign on the respect of minimum wage in road transport – Commissioner Bulc has called for the ETF to come up with concrete proposals for the road package. This is exactly what we have always done in the past and again today. We have sent all our proposals to the Commissioner and have presented some of them to the Member States at today’s event,” commented ETF Road Transport Section President Roberto Parrillo.