Fatigue in professional drivers is the norm on European roads and directly linked to their notoriously poor working conditions, according to a new study by the European Transport Workers’ Federation, the first EU-wide study in 15 years, on driver fatigue in passenger and freight road transport.

Everyone wants to get their parcels delivered on time, their supermarket well-stocked and to get their destination in comfort and safety. But what do we know about the drivers who make it all happen?

2861 truck, bus and coach drivers in freight and passenger road transport gave the ETF direct insight into their harsh reality:

All this adds up to driver fatigue, endangering the safety of drivers and other road users, increasing the risk of accidents on EU roads.

While it is a well-known fact that driver fatigue poses a major risk to the road safety of all road users, measures taken among employers and at the European policy and legislative level to tackle this issue for professional drivers are insufficient.

Eliminating driver fatigue is becoming even more urgent by the minute, especially as the EU embarks on its Road Safety Policy Framework 2021-2030 – Next steps towards ‘Vision Zero’.

In the face of inaction, the ETF is raising the issue of driver fatigue, its impact on road safety and the effective enforcement of the Mobility Package and calling for action from policy makers and employers:

The ETF is also recommending a range of other measures to increase drivers’ well-being and road safety overall.

Europe has no time to lose. Given that road accidents involving heavy vehicles tend to be more serious than other collisions, because of the sheer size and mass of the vehicles, further delay will throw a spanner in the works and be detrimental to achieving “Vision Zero” and result in fatal consequences for road safety.

The European Transport Workers’ Federation (ETF) is a pan-European trade union organisation of more than 200 transport unions from the European Union, the European Economic Area, and Central and Eastern Europe, representing over 5 million transport workers in 40 European countries. We believe transport workers deserve dignity and fair working conditions. Our work is driven by our vision for Fair Transport: quality jobs for transport workers and a safe, reliable and affordable service for users. 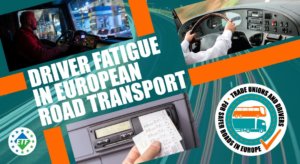