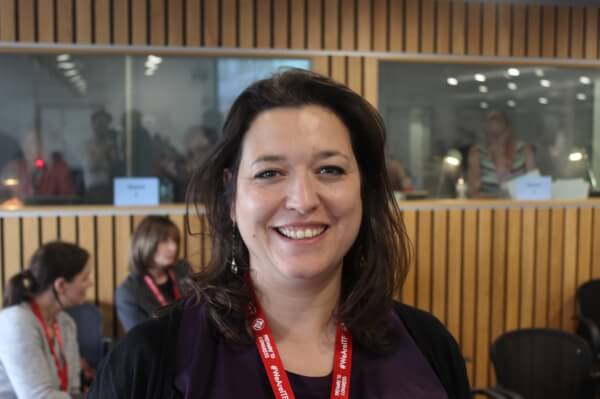 At an exciting and challenging time for our movement, the European Transport Workers’ Federation has appointed an Acting General Secretary to lead our work until the next Congress. The Executive Committee today confirmed the appointment of Livia Spera.

Livia was pleased to take on this new challenge. “It is an honour to be chosen as Acting General Secretary of the ETF. This is an amazing organisation, and we owe our strength to our affiliate unions across Europe. I look forward to working with them to build power in an autonomous ETF, reinforcing our sections and leading the debate on the issues that affect us all: automation, climate change and the struggle for a more social Europe.

“Since the Barcelona Congress, we have gained strength in many ways, and the success of our Fair Transport campaign shows what we can achieve together. Now it is time to take the next step and achieve our full potential – the transport workers of Europe are counting on us!”

ETF President Frank Moreels welcomed the new Acting General Secretary. “I am delighted that ETF affiliates have approved unanimously the recommendation of the Management Committee. Livia is a fantastic trade unionist, and the perfect person to lead the ETF in the years ahead. She is an expert on the policy issues affecting Europe’s transport workers, and she has a clear vision for the future of the ETF. After her time as a charismatic and persuasive Political Secretary for Dockers and Fisheries, I cannot wait to work with her as we continue the transformation of ETF into a modern mobilising and campaigning force. Long live ETF!”

Livia Spera will hold the role of Acting General Secretary until ETF’s next Congress, where a full election of all ETF members will take place to choose a General Secretary. The General Secretary of ETF is the organisation’s most senior member of staff, managing the Brussels-based Secretariat and building relationships with our more than 140 affiliate unions across Europe.

Livia joined the ETF in 2005, and was most recently the Political Secretary for Dockers and Fisheries. In this role she led the ETF campaigns on many issues affecting dockers and fishers. Livia has a Master’s degree in Labour Studies and is married with two children.