Fair Transport in Europe: Young workers on the move

As part of our action week for Fair Transport in Europe, the high point of our campaign against social dumping and exploitation, the ETF Youth Committee organised a series of Youth Journeys. Young activists travelled towards Brussels for the massive demo on 27 March, acting as video reporters on the way. They used all kinds of transport to travel across Europe, and spoke to the transport workers they meet on their way about the daily reality of social dumping and exploitation. Then they shared what they discovered, and their own reflections, in a series of video diaries.

Our Eastern group gains some new members, attends a conference in Gdynia, learns about the challenges for dockers and appears on Polish TV. Meanwhile a second group gathers support from Fair Transport from young workers in London, before setting off for the overnight ferry to Rotterdam.

On the third day of the Youth Journey, all of our groups met many interesting colleagues along the way!

Our young activists from Nautilus International arrived in Rotterdam, where they had a chance to chat about common challenges and learned about the Netherlands’ extensive system of canals and inland waterways. Meanwhile our Eastern group arrived in Berlin, where they discussed how to get young workers on board of the unions, as well as how to make Europe more social. And finally a new group left Rome to fly on a Ryanair flight to Paris. There they heard about the struggles that Ryanair workers face day to day. Are we going to fight to improve conditions at Ryanair? Absolutely!

Our Youth Journey is slowly coming to an end!

Our young workers are on their way to Brussels for the massive Fair Transport demonstration tomorrow! The youth crew from Nautilus International spent the night in Rotterdam and then met some rail staff before boarding the train for the final leg of their journey. Meanwhile, the group arriving from the East visited a bus depot in Berlin and met aviation activists before taking their flight. On arrival in Brussels they were welcomed by ETF President Frank Moreels. 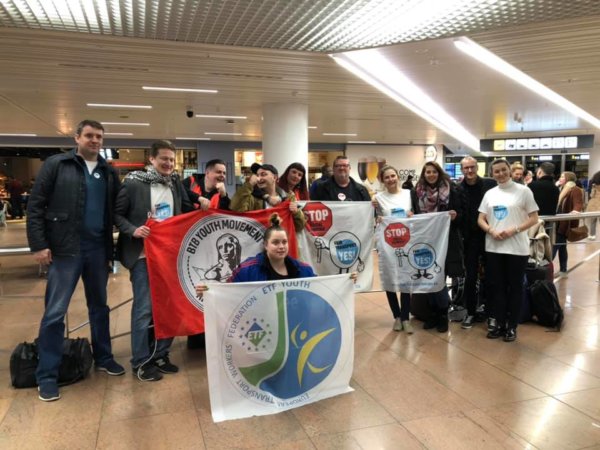