Fighting violence against women transport workers must be a priority

ETF Executive Committee states: “Fighting violence against women transport workers must be a priority”, calling on the EU Commission and the EU Council to stop delaying measures to end gender-based violence and start acting, on employers to take effective action hand in hand with unions, and on EU Member States to ratify the ILO 190 Convention on eliminating violence and harassment at work. The full statement is available here.

25 November marks the “International Day for the Elimination of Violence against Women”. The ETF Women’s Conference on 20/21 October reconfirmed gender-based violence as one of the most urgent problems to tackle across all transport modes. Violence, harassment, and sexual harassment in the workplace are among the main barriers that prevent women from working or staying in the transport sector.

The Covid 19 pandemic has worsened the problem.  Many reported cases showed an increase in aggression and violence against frontline workers in all sectors, including transport, particularly against women transport workers.

During the lockdowns across Europe, there has also been an alarming increase in domestic violence against women self-isolating at home. This has become an important workplace issue for women working remotely or teleworking, which many women have to combine with responsibility for taking care of their children while schools and kindergartens remain closed.

The EU Council is delaying Member States’ ratification of the ILO Convention on eliminating violence and harassment at work by stating they will issue legal advice on ratification – which ETUC and ETF consider to be unnecessary – they have yet to publish this legal opinion.

Furthermore, the European Commission is delaying its proposals to “prevent and combat specific forms of gender-based violence” which were due on 8 December 2021. EU accession to the Istanbul Convention on violence against women that began in 2015  also remains blocked in the European Council despite a European Court of Justice ruling in October, specifying that the EU is not required to wait for the completion of the ratification by all Member States.

The ETF Executive Committee meeting on 24-26 November 2021 in Copenhagen calls on: 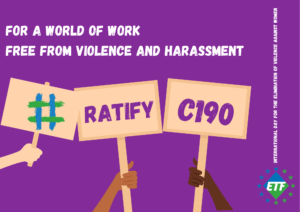