In France, SNCF (French National State-owned Rail Company) is offering its railway workers driving freight trains washable period briefs to compensate for their difficult access to sanitary facilities.  Of course, the idea comes under the guise of a solution.  In reality, it is a push for productivity because period briefs can be kept for several hours, meaning workers will no longer “waste” time going to the toilet.

This idea has caused outrage amongst SNCF rail workers, their union CGT, and the ETF.  The measure is a far cry from the Women in Rail Agreement signed by Social Partners in the rail sector (CER and ETF) back in November, which is binding, aims to attract more women to the rail sector, and improve their working conditions.  Of course, access to decent sanitary facilities is a massive part of improving working conditions and is stipulated in the Agreement.  SNCF must implement the Agreement as part of CER (Community of European Railway and Infrastructure Companies), the organisation representing rail employers.

In the Women in Rail Agreement, the preamble that signing parties commit to specifies:

“Improvements of working places from the female perspective, like providing sufficient and appropriate sanitary facilities for stationary and mobile personnel or health&safety conditions at the workplace as well as a better work-life-balance help to retain women within the sector.  This is also true when ensuring equal pay, e.g. through the development of gender-neutral classification systems”.

Signatories must commit to carrying out actions in the Agreement within 24 months of signing (signed November 5 2021).

SNCF’s proposal is a slap in the face and hides behind “fake feminism” – women have the right to respect and dignity wherever they are.  As a signing party, SNCF must set an example, and mocking the needs of women by offering period briefs misses the mark.

French union, and ETF affiliate, CGT are taking action.  Recently, David Gobé, member of the ETF Rail Section and SNCF European Works Council President, presented a motion on the topic demanding that Management tackle the real issue: access to decent sanitary facilities and sufficient time to use them at train stations, for example.

Women are a substantial minority among SNCF drivers, with 394 female train drivers compared to 12,530 among their male counterparts.

These women working in freight rail for SNCF have been asking for decent working conditions for years, particularly access to toilets at train stations and sufficient break times to use these facilities.  Women have flagged up having to urinate standing up between trains.  Of course, changing period products is difficult to the point of impossible when faced with no access to facilities.

The initiative, incited ironically by SNCF’s Gender Equality Department, started with an email in mid-April explaining they would roll out a test phase with the washable menstrual briefs and even look for volunteers to test out this alternative to conventional sanitary protection.

Access to toilets is not only needed for women, but the entire workforce and would improve working conditions and basic human dignity for all workers. 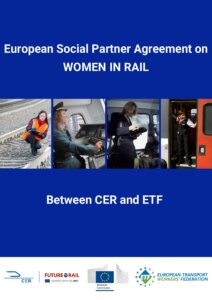