Germany’s ver.di joins the movement for Fair Transport in Europe

ver.di is the second biggest union in Germany, and this week their transport section held its conference. Delegates from all federal states and transport sectors met in Berlin to set the course for the coming years. European issues have a huge impact on German transport workers, and the Fair Transport campaign was high on the conference agenda! 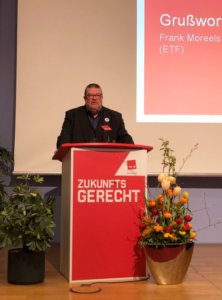 The President of the European Transport Workers’ Federation, Frank Moreels, told delegates how vital it is that transport workers across Europe stand together against social dumping and exploitation. Wiebke Warneck from the ETF Secretariat showed the scale of our movement, presenting the plans for our international action week. The response was enthusiastic. The conference immmediately endorsed a strong message of support and solidaity for the campaign, and ver.di pledged to send dozens of workers to the demonstration in Brussels on 27 March 2019.