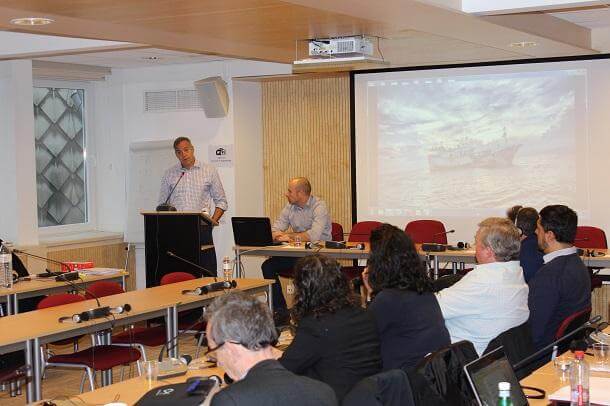 New York Times investigative reporter Ian Urbina has lifted the lid on modern day slavery at sea in his two year, award-winning research ‘The Outlaw Ocean’. On Thursday 3 November he presented the highlights of his series of articles to the ETF, ITF and key stakeholders of the EU fishing sector disclosing practices of crime and violence in international waters that often go unpunished.

Ian Urbina: “Few places on earth are as free from legal oversight as the high seas. Our investigation has discovered practices of illegal fishing, illegal manning agencies tricking villagers in the Philippines to work under poor safety and labour conditions on ships, recorded proof of unarmed men being gunned down while the killings went unreported… The complete lack of accountability at sea, sometimes with fatal consequences, is astonishing and simply unacceptable in the 21st century.”

Livia Spera, ETF Political Secretary for Fisheries commented: “Fishermen are voiceless victims of some unscrupulous companies that operate in the sector.  We have the duty to act and deter these unacceptable practices and we praise the work done by Ian Urbina to document this unacceptable reality. It was important for us to have this presented in Brussels because the EU is one of the major actors in the fishing sector globally and one of the biggest markets for seafood products.”

On 14 October 2016 the Council of the EU has approved a Directive regulating working conditions in the fisheries sector following a long-standing request from the EU Social Partners (ETF, Europêche and Cogeca) formalised in a Social Partners’ Agreement. The Directive transposes the ILO Work in Fishing Convention 2007 (C188) into EU law with the aim to ensure better working conditions for more than 150,000 fishermen in Europe. It will only come into force once 10 ILO Member State have ratified the Convention; at present nine did so, two of which are EU countries.

“There is an urgent need for the EU to take a leading role in fighting anarchistic practices at sea and pursue a more socially sustainable fishing sector at global level. The current common fisheries policy is focused on environmental protection and resources management. It is high time to start thinking about people and ensure decent working and living conditions which can pave the way for global standards for the sector”, Livia Spera continues.

Jacqueline Smith, ITF Maritime Coordinator: “The ITF is very grateful to the NY Times reporter Ian Urbina for giving exploited fishers and seafarers a voice through his riveting series that exposes the brutalities on the high seas. Few people know about the inhuman conditions many fishers and seafarers suffer under. There are of course good shipowners and those shipowners have good relationships with the ITF and our affiliates, but it is a fact that there is a dark side to the industry which Ian exposes. Our goal as a trade union organisation is to raise the awareness of governments and the general public so that we secure the rights of these workers and make it impossible for bad employers to continue treating men and women this way.”

Ian Urbina’s presentation at the ETF premises was attended by representatives of the European Commission and Parliament, EU stakeholders (ship-owners, traders, processors), environmental, social and development NGOs, representatives of several Advisory Councils and ETF/ITF affiliates in the Fisheries Sector.