Lessons learned from three decades of liberalisation in the railway sector

Time to step away from competition and liberalisation: ETF paper confirms what we have known all along: three decades of liberalisation have not delivered on the promises of growing the sector, improving services, or making rail transport more efficient.

At the start of the European Year of Rail, the Portuguese presidency asked the European Economic and Social Committee for their views on the unbundling of the European railway sector, and the lessons learned from three decades of progressive liberalisation.

With the high expectations for the railway sector to help Europe reach its climate targets, we need to be sure Europe is on the right track with this process, which benefits not only the climate targets but also the entire sustainability of the sector.

This goes hand in hand with making rail socially and economically sustainable.

ETF has closely followed the restructuring of the sector as it unfolded and analysed the detrimental effects of liberalisation on the working conditions in the sector, the evolution of its safety record and its efficiency, all to be factored in the sustainability of the sector.

In its paper, the ETF explores the different paths followed by countries from opposite sides of the spectrum: The United Kingdom – which is home to the most privatised rail sector in Europe – to Austria and Switzerland, two countries that have opted to keep their railways mostly state-owned and operated.

What emerges is what we have known all along: three decades of liberalisation have not delivered on the promises of growing the sector, improving services, or making rail transport more efficient.

On the contrary, the decisive factors for the well-functioning of the sector are the public-led investments in modern railway infrastructure, rolling stock and public services as well as the internalisation of all external costs for all modes of transport.

“European and national leaders need to step away from the ideology of competition and instead come up with an active strategy that recognises rail transport as a service of general interest and promotes it as the backbone of a wider sustainable transport system!” said Giorgio Tuti, ETF Railway Section Chair.

We need measures to boost rail freight and passenger transport – giving priority to the quality of services and sustainability rather than the reduction of personnel costs, eliminating social dumping between transport sectors and the social shortcomings in railways for a modal shift.

The ETF believes our analysis must be part of the ‘Lessons learnt’ process, launched by the Presidency.

Boundless competition does not improve any aspect of rail transport. Instead, ETF calls for more cooperation on the railways to improve cross border connections, guarantee high-quality service in all regions and encourage multi-modal transport.

Lessons learned from three decades of unbundling in the railway sector 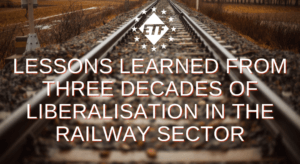