Life in a country at war / Interview with Yuliia Batalina, ETF aviation worker in Ukraine

Yuliia Batalina used to be Senior Cabin Crew at Wizz Air in Ukraine and the official ambassador of the airline in media. She set up the legal basis of a trade union within the Kyiv branch of Wizz Air. And for this, she lost her job in 2020.

She had received a job offer abroad just before the war started, but she decided to remain in Kyiv. She thinks it is her moral duty to be with her family and country during these times.

Beyond her grief and sorrow, and, somehow, defying all the fears, threats and huge pressure she – like all her other Ukrainian compatriots – are currently living under, she has not lost all her hopes.

‘Peace is what I want more than anything now and what I dream of‘, she confessed in an interview she agreed to have with us.

Once peace is restored, she hopes to return to Kyiv. There is a glimpse of hope in the heart-shaped snow in a photo she sent us. 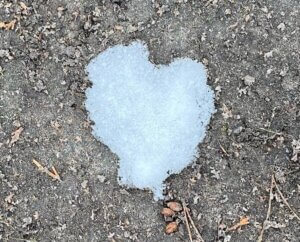 As well as in some of the promises she made to herself regarding the future. One of them is to continue to fight for her rights and for justice to be done in her lawsuit with Wizz Air.

You can read here the complete interview with Yuliia Batalina, our ETF aviation worker in Ukraine.