Eoin Coates is a self-proclaimed avgeek, and his career path certainly supports this claim. After graduating from the National University of Ireland Galway, he pursued a career in aviation, working as cabin crew for two major Irish airlines, before joining the International Transport Workers’ Federation (ITF) in 2018 as Assistant Secretary for Civil Aviation and Tourism. At the ITF, he worked extensively on low-cost carriers, ICAO, and sustainable tourism at a global level. All of that work brought him to his current position.

In October last year, Eoin joined the ETF as Head of Aviation when the aviation industry was already devastated by a global pandemic. Reflecting on this move, he says that after years of working in the field, “I knew what I was getting into, but I also knew that I could make a difference.”

Taking on the task of bringing together the voices of aviation workers around Europe is no small feat. In some ways, aviation workers differ considerably depending on whether they work at airports, on aircraft, or in air traffic management. The complexity of these sectors can seem daunting, but, at the end of the day, says Eoin, “they’re all workers! On a technical level, issues can become complex, and that is natural, but the aims are the same at a political level. Think about it this way: if a flight stops, so does the work for the pilots and cabin crew who would work that flight, and for the check-in, boarding, catering, fuelers, ramp staff and other ground staff that would service that flight, and then the air traffic controllers who monitor the flight, the staff maintaining the equipment to do so, and the information providers, and so goes on the chain.”

The main threat to aviation workers’ collective strength, however, is a lack of unity. Eoin points out that on this, employers are sometimes stronger because they “are united around the goal of profit, and this unity has served them well. We need to unite around our own cause, and I think this crisis has made that clearer more than ever.” 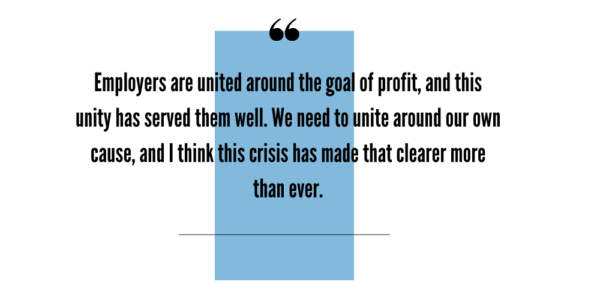 The need for a unified approach became evident yet again during last year when support for European aviation workers was often lacking. Certain parts of the industry, such as airlines, have been backed throughout while others, such as ground handlers, suffered, and there was also a serious lack of a long-term vision. In addition to job support schemes that cover all workers no matter their employment type, the sector also requires a continuation of training programs to ensure swift recovery when the pandemic is contained.

Instead of strengthening these social aspects of the industry, the European Commission stayed on its usual track and pushed for further liberalisation of the industry while ignoring social dumping. It reflects a “race to the bottom mentality,” believes Eoin, “a nasty trait of the aviation industry. All else is forgotten except profit. For me, that is the root of social unsustainability.” The issue is exacerbated by aviation companies’ incessant search for profits and the fact that “labour is the second-highest cost for the aviation industry after fuel. As airlines are limited in their ability to reduce fuel costs, they attempt to cut labour costs. It is a terrible thought that if we were barrels of fuel, we would have more equality than we do as people!” 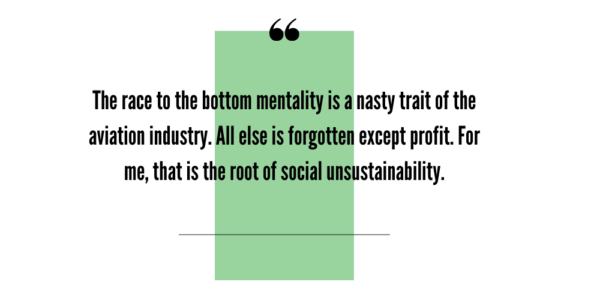 Challenges abound, it seems, in European civil aviation. When asked about upcoming priorities for the section, Eoin points to some significant policy and political challenges, starting with the “fight to stop the unnecessary liberalisation of European airspace through Single European Sky. While we accept that changes need to be made, in particular changes that will help us reduce the industry’s carbon emissions, we don’t see a need to lower the quality and quantity of jobs in that process. Liberalisation is not the solution to all of our problems!”

“ETF’s role needs to go beyond just developing policy and lobbying, though,” he adds. “We need to be the European vessel for the goals, aims, and ambitions of our affiliates and their members. Our work needs to be led from the bottom-up by our affiliates.” 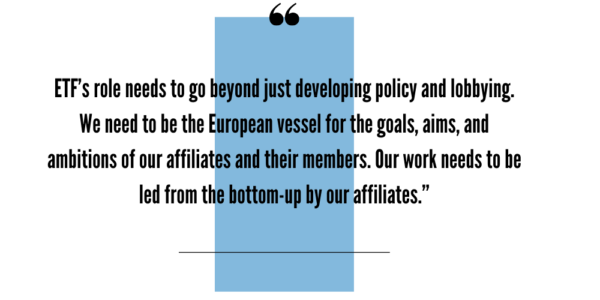 Working with and for affiliated unions characterised Eoin’s work during his time at the ITF as well. As a European, moving from global to European level doesn’t feel like much of a change as the two organisations are “closer than ever before – it feels more like I’m returning home than starting something new!”

A global mindset can bring a new dimension to the work of European trade unions, too, as there are many opportunities for collaboration. ETF’s Civil Aviation Section recently launched a project that builds “historic cross-Mediterranean links between our Southern European unions and unions in the Arab world. We’re working closely with the ITF office in Amman on this. We have an opportunity in Europe to make a significant impact on workers around the world.”

Recovery from the COVID-19 crisis remains on top of the list of ETF priorities in civil aviation. While very challenging, this time also allows us to “rebuild and put ourselves in a better place to deal with the challenges of the future,” reflects Eoin. At the same time, other global issues remain, the main one being climate change. 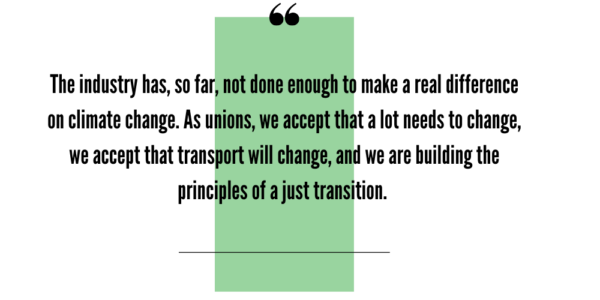 The key to making a just transition and a more just and equitable society a reality, as usual, lies in collective action. This is where unions come in, but they are facing various challenges. “Our movement has struggled in recent years, and we are quickly losing a generation of socially-conscious young people. The opportunities for growth are right there in front of us. We just need to remember that the power of unions is not in policy, but action.”