In a few weeks, our Fair Transport campaign will come to a rip-roaring conclusion. During our Fair Transport action week, thousands of transport workers will show just how determined they are to end exploitation and social dumping. In the meantime, we are taking our positive vision for the European transport sector to EU leaders.

On Tuesday 26 February, ETF General Secretary Eduardo Chagas and colleagues spoke with two leading figures of the European Peoples Party (EPP), Dutch MEP Wim van de Camp and Vice-Chair Marian-Jean Marinescu. Even if the ETF and the EPP do not always see eye to eye on policy issues, the meeting took place in a constructive atmosphere. Lauding the ETF staff for their professionalism, Wim van de Camp was willing to admit that there are pressing problems in the transport sector. He specifically mentioned the low price setting in the road haulage industry and the exploitation of drivers by companies like Uber. Eduardo Chagas underlined that the current legislation designed to protect workers should be properly enforced: “policy makers have to take action against companies that are breaking the rules. When the abuse of transport workers continues, anti-European populist parties will be the only ones to benefit”. 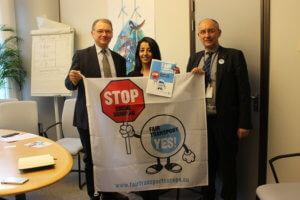 On Thursday 28 February, we met the Greens/EFA. We spoke with French MEP and Transport Committee Chair Karima Delli and Belgian MEP Philippe Lamberts, Co-President of the group. Their attitude was very cooperative, as they agreed with most of the proposals shared in our campaign manifesto. Our interlocutors especially appreciated our social approach to automation and digitalisation, some of the biggest challenges for present-day society. Changes have to be made in a socially sustainable manner and workers must not pay the price of corporate greed. Lamberts supported our vision: “The machine has to serve people and not the other way around”.

Karima Delli spoke of the need to forge alliances, as the European transport sector is in desperate need of proper regulation. Like all human beings, transport workers have the right to make a decent living from their professions. They should not be treated like second class citizens. At the close of the meeting, Lamberts promised to pass on our proposals to the other members of the group. We look forward to seeing them again at our upcoming action in Strasbourg on 26 March and our huge demonstration in Brussels on 27 March.