NO TO SALE LSG SKY CHEFS! 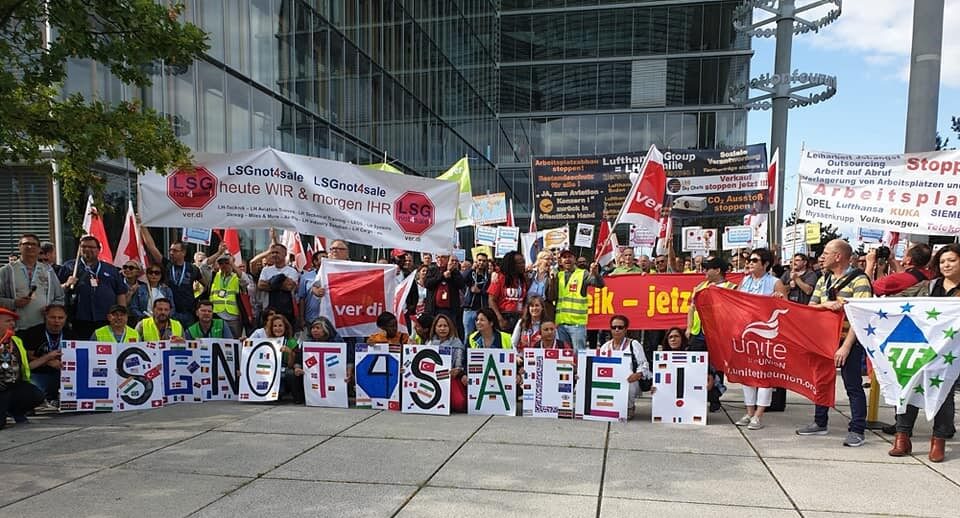 The Lufthansa Group is preparing to sell its catering arm Lufthansa Sky Chefs (LSG). The first step is to sell the European part of the business and more than 10,000 workers will be affected. The second step will be to sell the remainder of its global catering companies. This means 35,000 jobs are at stake.

Our trade union demands are not to sell LSG Sky Chefs, preserve all jobs and keep all social standards.

Under the leadership of ver.di (Germany), Unite the Union (Great Britain), Unite HERE (USA) and other unions joined forces to make pressure on Mr Spohr (CEO of the company) to take responsibility for the 35.000 LSG workers internationally.

ITF and ETF are coordinating the international response, notably with letters sent to the company on behalf of all the workers concerned and preparing the next steps of the campaign. Actions took place notably in Dallas, Washington, Frankfurt and London.

Livia Spera, ETF General Secretary, who attended the LSG workers’ summit and the demonstration in Frankfurt on 5th September, commented: ‘We are calling on Lufthansa and the LSG managers to act immediately to provide stability and certainty to the workers. We will continue to show our determination to defend the jobs and the social conditions of the workers. Once again, we don’t accept the company refusal to enter immediately into a meaningful dialogue with us.’

She concluded: ‘Other trade union initiatives will be taken by our affiliates to preserve the dignity of the workers and ensure a future for their families because any dismissal, individual or collective, is a failure of the company and we want to avoid that!’