Our analysis of the European Parliament elections 2019

Voters did not deliver the feared right-wing tsunami, but the new European Parliament is more liberal and green, with a larger nationalist and xenophobic component. We look at the results and see what they will mean for coalition building and our lobbying.

The European Parliament has 751 members, currently organised in 8 political groups. Each Member State has a certain number of seats depending on the number of citizens.
In order to reach the absolute majority of the 751 MEPs, a legislative proposal must obtain 376 votes.

2. Results of the elections

Below you see the outcome of the May 2019 elections, those are still the provisional results (data 29/05/2019 – 16:50). The turnout of these elections was the highest since 2004 when a new system of distribution of seats was introduced – 50.95% on EU average. That means that every second citizen of the EU voted in these 2019 elections, which is a really positive result.

The gender balance of the EP is 39% women, the highest level of female representation yet.

These elections denied many of prognoses.

First, abstention rate has been lower than expected.

Furthermore, it was feared that a political tsunami would occur due to the rise of extreme right-wing nationalist and populist parties. Although Eurosceptics and far-right populists parties grew (a 17-seat increase compared to the outgoing Parliament), they fell short of reaching one-third of all MEPs as they wished. Notwithstanding their relative victory (in particular with Marine Le Pen in France and Matteo Salvini in Italy), they are currently scattered in different groups, such as the ECR, the ENF and the EFDD. Being a motley coalition, their ability to form one single parliamentary group remains hypothetical. Although it should not be forgotten that the Orbán’s Fidesz party still counts into the EPP group. Conversely, these political forces will suffer significant losses when the 29 MEPs of Nigel Farage’s party will give up their seats if the UK will leave the EU. But still their ability to block the decision-making should not be underestimated. And it shows anyway a worrying trend: a constant progression of individualism, fears and xenophobia in Europe.

One of the major lessons drawn from this election is that for the first time since the first direct elections 40 years ago, the two big groups the EPP and S&D do not hold together the absolute majority anymore, even so they remain the biggest groups. In addition, it must be recognized that a significant proportion of the electorate expressed a clear support for more (economic) liberalism as the clear winner of this election is the ALDE group (Liberals). The GREENS/EFA also won this election showing how environmental concerns are gaining an ever-stronger place amongst citizens of Europe (more in Northern and Western Europe than in Eastern and Southern Europe though). These two political groups are now essential to build a majority in the European Parliament.

Due to these changes, which are reflecting changes at national level everywhere in Europe, the new composition is much more fragmented than ever before. As mentioned above, the main difference to the last mandate is that EPP and the S&D together do not have any longer enough seats in order to vote a legislative proposal through. This necessarily implies that groups need to compromise in order to reach the absolute majority and be able to vote a legislative proposal through or reject it. A coalition of at least three groups is needed in the new EP to form an absolute majority.

The minimum following coalitions are possible depending on the circumstances and the issues:

This means that the EPP is always needed in order to vote a legislative proposal through.

The pro-European forces 503/751 are largely outweighing the non-European forces, but the rise of the extreme right-wing populists and nationalists is very worrying throughout Europe.

28 elected members are not linked to any political group for the time being.

4. The results in the different member states:

In Germany the Christian Democrats as well as the Social Democrats had historically low results. In France the extreme right-wing nationalist party of Marine Le Pen (part of the ENF group) is stronger than the party of President Emmanuel Macron, “En marche” (part of the ALDE&R group). In Hungary the Fidesz Party of Viktor Orban is the clear winner, as well as the PiS in Poland (part of the ECR group).

In Austria it is the conservative ÖVP who won the elections. In Greece the conservative party Nea Dimokratia has one seat more than Syriza, the party in power (part of the GUE/NGL group). In the Netherlands it was the social democrats who where the winners, as well as in Spain, Portugal and Sweden. In the UK the Brexit party (EFDD) won 29 seats. In case of Brexit the EFFD group would lose those seats. In the North of Belgium the winner is the extreme right-wing party, while in the South the Greens won the elections even if the socialists remain the first party.

The votes of workers are tipping from the left to the right, specifically to the extreme right as these parties presented programs containing proposals to fight against social dumping. This is an issue that the European trade unions as a whole and their members must address.

5. What does this mean for the ETF’s lobbying work?

The 2019 European elections seem to suggest that the polarisation in Parliament goes beyond the traditional right/left divide. Still the old battles between capital and labour inherited from the 19th century has not gone away as the struggle against growing socio-economic inequalities is more justified than ever. Having said that, the political game is becoming ever more complex. To the traditional divide between the right and the left, one can add the split between the supporters of a Europe founded upon cooperation – as proposed by the advocates of national sovereignty – and the champions of a closer European integration. With the good results of the Green parties, a new dividing can even be found between those green-minded MEPs who will call for a paradigm shift of the development model and those who lack any ecological awareness. The ETF will have to take these developments into account.

The EPP together with the S&D, the ALDE&R, and the Greens are the components of a pro-European coalition against the block of Eurosceptics and far-right populists. But in practice it remains indeed unclear how it will work to win majorities. It may look like it is going to be more complicated than before to build majorities on ETF stances. To get around this difficulty, we may aim at developing strategies on a case by case basis, as more and more ‘ad-hoc coalitions’ – according to the subjects being discussed – are likely to win a majority of votes.

ETF will, with the help of its affiliates, prepare an overview of which trade union friendly candidates actually got elected, in which country and linked to which group.

It will be even more crucial in this political set-up that good relationships are built with the future MEPs. MEPs signing up to our ETF demands will as well need to be found in the EPP and ALDE&R group in order to be able to come to an absolute majority.

Most seats in the S&D group are taken by Spanish Social Democrats, followed by Italy and Germany. Most members of the GREENS/EFA come from Germany, followed by France and the UK. The majority of seats in ALDE&R go to France, followed by the UK. It will be crucial that affiliates, too, build relationships with the MEPs coming from their respective countries.

It remains to be seen who will chair the EP committees that are most relevant to the ETF, notably TRAN, PECH and EMPL.

Finally, taking into account the development of the comitology and the number of delegated acts adopted after the Lisbon Treaty, our lobbying has changed. Indeed, more and more legislation (+/- 80%) is adopted at first reading. This means that the upstream phase is very important (policy shaping, impact assessment/consultations, informal tripartite meetings, etc). And the lobbying of the Member States, notably through the COREPER (Committee of Permanent Representatives in the European Union) becomes paramount.

The European voters sent first a message to their national governments in order to sanction or encourage national politics. In most countries the elections turned around domestic fights, only than did the voters pronounce themselves on the EU project.

The dominant issues throughout Europe have been the choice between nationalism or the pro-EU view, climate change and immigration.

The message conveyed by the citizens is very clear: this Europe does not work anymore. For the ETF, more than ever, a social Europe is needed to protect the workers against the various forms of social dumping which come as a consequence of EU policies inspired by protection of the markets and that see citizens as consumers rather than as workers. For the ETF and our members Fair Transport in Europe is the answer.

The positive surprise of a higher turnout may well show a renewed interest for Europe, and possibly a greater awareness of the role of the MEPs as policy-makers and their ability to make a genuine impact on the everyday life of each European citizen. In this respect it is important to underline the greater electoral participation was particularly true among young electors, often motivated by a wider ecological consciousness expressed in a vote for Green parties (Germany, France, Belgium). ETF must draw on this positive development as it shows that many Europeans did not vote against Europe, but claim a better Europe working for people and guided by sustainable development criteria.
The growth of Green parties in several countries also shows that social movements can make the difference in shifting votes and the priorities in the political agenda. Now more than ever trade unions will have to work to renew their capacity to mobilise. In particular, more than ever, the analysis of the elections’ result confirms the importance for an ever-greater involvement of the youth in social movements, and the need for ETF to better respond to the aspirations of young people and the young transport workers in particular.

In the next four years it will be possible through the ETF work with the European Parliament to push our demands with the MEPs. We can ensure that certain amendments to legislative proposals gain a majority or try to make them fall. In order to make our lobbying efforts successful we need to build new relationships with the S&D, the GREENS/EFA and GUE, but as well the EPP and this time a close look to the ALDE group is essential. And we need to follow the work upstream notably with the Commission and the Members States, through the COREPER at EU level and with the Ministries at national level with the full support of our affiliates and their members. 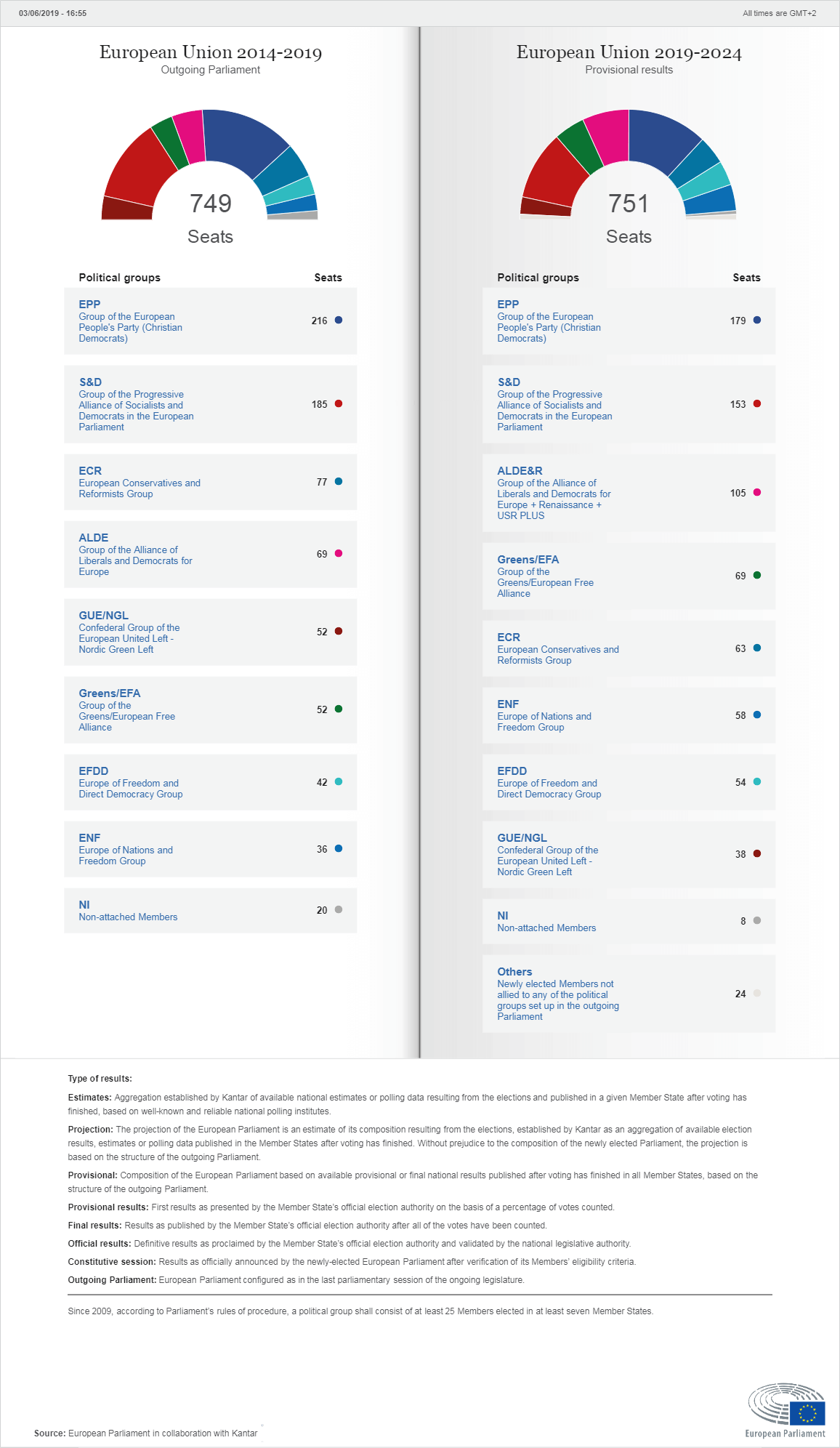