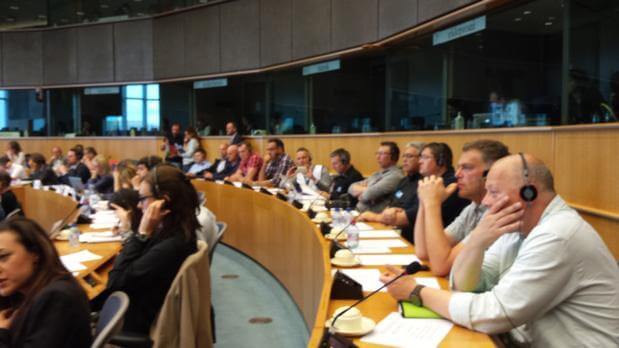 Yesterday, 15 June, an ETF delegation made of members from Belgium, France, the Netherlands and the UK has followed the presentation of Mr Fleckenstein’s report on the proposed port service regulation.

Presenting his report, Mr Fleckenstein expressed his satisfaction for having agreed with Mrs Bulc the deletion of the market access chapter and stated that improved competition passes through good working conditions and and strong social dialogue. In his conclusive remarks he affirmed that ‘We need to send a signal that we are aware that working conditions in the sector have to be improved’.

ETF Dockers’ Section vice-chair Torben Seebold declared ‘The ETF was present at the Parliament today to renew the strong support of our members working in all port services, including cargo handling, towage, mooring and pilotage for the solutions proposed by Mr Fleckenstein. The amendments tabled by the rapporteur tackle the major shortcomings of the Commission’s proposal and overcome the lack of social concerns of the Council’s general approach. For the ETF and its members it is a momentous change and a chance to enrich the EU ports policy of a meaningful social dimension. We are also pleased that the report acknowledges the role of sectoral social partners in dealing, amongst others with automation and technological innovation. Social dialogue can also play a crucial role in tackling precarious employment. These are for us high priorities, and we are ready to engage in discussions with our counterparts at EU, national and port level’ he concluded.