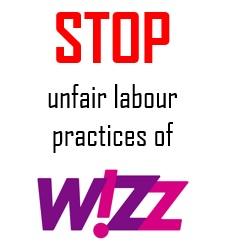 The ETUC and the ETF have launched a LabourStart online campaign to support the 19 dismissed Wizz Air workers and union leadership, suspended or laid off one month after their announcement to set up a cabin crew union at the company. By clicking here, you can send a protest letter to the CEO of Wizz Air demanding their

Wizz Air is a low-cost airline based in Central and Eastern Europe. On their website, the company proudly says: “we believe that people make all the difference” and that they “believe in high ethical standards driven by an excellent team-player approach”. However, that “ethical” approach does not seem to include the acceptance of trade unions defending workers’ rights.

Earlier this year, a couple of courageous cabin crew members decided to set up a trade union at Wizz Air. One month after they formally announced the foundation of a trade union, its President, Mircea Constantin, was fired on false disciplinary grounds. The Vice-President and Secretary of the trade union, Claudiu Bita and Denisa Chelu, were suspended for two weeks on the ground that “their involvement in the trade union makes them a safety hazard during the flights”.

The top management of Wizz Air, including the CEO, visited the company’s hub in Bucharest and verbally confirmed that they will not accept any unions inside the company. The union was given one week to dissolve itself, otherwise actions would be taken, namely the removal of one aircraft from Bucharest and consequently further lay-offs despite earlier growth announcements. After the deadline, the management sent a letter informing that, given the situation, the company had decided to establish a new cabin crew employment company. That company would provide non-unionised workers for Wizz Air in Bucharest.

The pressure put by the company increased and many workers were afraid to lose their jobs. The management even contacted people during their days off to inquire about their position vis-á-vis the union; no one was allowed to remain neutral. The whole story culminated on 4 November with the termination of 19 union members’ contracts, mostly founding members, due to the ‘reorganisation and lower demand during the winter schedule‘. By setting up the LabourStart protest action, the ETUC and ETF aim to increase the pressure on the Wizz Air management to reinstate the workers and union leadership and condemn the company’s behaviour towards workers making use of their legal right to set up and join a trade union.