The signing of the declaration was followed by a big event hosted by the European Commission on the Future of the Single European Sky. It brought together all stakeholders of the aviation sector and discussed the future of the SES under three perspectives: from patchwork to network; digitalisation and safety and automation.

Environmental questions are now on the political agenda, as this is a priority of the Finnish Presidency. The Finnish Minister of Transport, Ms. Marin insisted on the environmental challenge and acknowledged that the lack of capacity the sector is facing today comes mainly from the cost reductions over the past.

The European Commission with Mr.Hololei, Director General DG MOVE, European Commission underlined the important role of the social partners in the coming changes. He stated that future regulations will need to be timely and socially acceptable. This was a prerequisite for ETF to sign the declaration.

ETF will do its utmost to influence all the next steps and developments for the social progress so that all workers in Air Traffic Management keep their jobs and their working conditions. We will develop a strategy oriented to a qualitative social dialogue with the employers together with the national authorities and the EU Institutions. 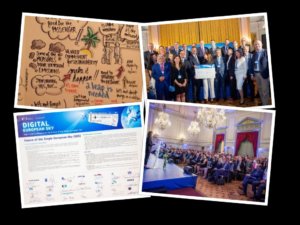