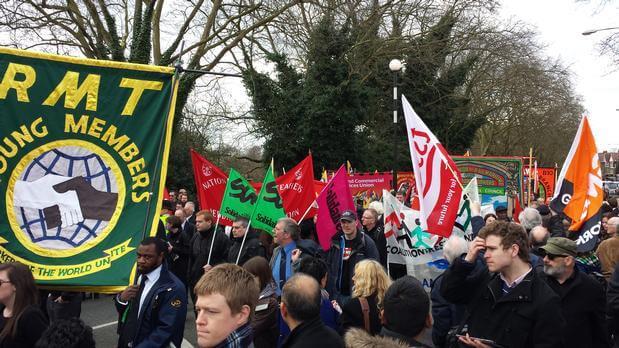 One of the world’s great working class heroes, Bob Crow, has been laid to rest in the presence of family, friends and comrades in a service in London.

Thousands of supporters lined the streets of the East End to catch a final glimpse of Crow as his coffin was horse-drawn from his council flat at Woodford.

Crow was general secretary of the UK’s Rail, Maritime and Transport union until his recent death in an East London hospital following a heart attack at the age of 52.

Crow was a towering figure of the British trade union movement who never shied away from a fight in defence of his members.

He was a constant advocate for peace and justice for all and encouraged trade unionists, civil rights advocates and politically progressive people everywhere to try harder for a better and more equitable world.

Crow had been the RMT’s leader since 2001, securing a reputation as a militant champion of workers, in the process adding tens of thousands of members after the union repeatedly won better pay and conditions.

International Transport Workers’ Federation president and Maritime Union of Australia national secretary Paddy Crumlin said the funeral was testament to Crow’s legacy and an incredible tribute to a man who had fought until the very end.

“Bob was a character larger than life and will be sadly missed by the working class he represented with such honour,” Mr Crumlin said.

“Bob was loved by his friends, respected by his foes and admired by all those who wish for a better world.

“His death has brought people from numerous trade unions and other progressive organisations from around the world together in mourning.”

ITF acting general secretary Steve Cotton said: “Bob was so many things: friend, example, and tower of strength. It should never be forgotten that to the last he was a true internationalist too.

MUA Western Australian Branch Secretary Christy Cain travelled to London to pay his respects to one of his personal friends.

“Bob was a true union leader, who gave his life to the working class,” Mr Cain said.

“A champion bloke, a champion leader, he will be remembered as someone who fought everyday of his life for his union and the underdog.

“It was awe inspiring to see how many people turned out to pay their respects to him and I hope others take up the battle where Bob left off.”

Maritime Union of New Zealand national secretary Joe Fleetwood said everyone in the trade union movement would miss one of its great fighters for a better world.

“Bob was prepared to fight for what’s right for working men and women,” Mr Fleetwood said.

“Bob was a figure who generated strong opinions in Britain and the world over for being unapologetic about brokering some of the best industrial deals for his members.”

“When Bob spoke, people listened. I have seen some good speakers in my time but Bob had a particular talent and he never failed to motivate a crowd,” Mr Familathe said.

“Bob was a true leader when it came to fighting for trade union rights and social justice.”

A BBC filmed report of Bob Crow’s funeral can be seen here, and includes the ITF assistant general secretary sharing his memories of Bob Crow’s le