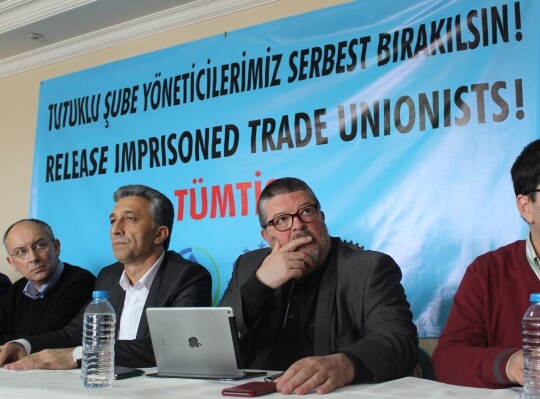 Nurettin Kılıçdoğan has been in prison for more than a year, sentenced for over 6 years. His crime? Encouraging workers to join Tümtis, the transport trade union for which he was branch president in the Turkish capital Ankara. Trade unionism is totally legal in Turkey, but his attempts to recruit union members were branded as an attempt “to establish a crime organisation…to recruit members to this crime organisation and being president of this crime organisation”. Several courts have backed Nurettin’s original unjustified conviction, and sadly this case is just one of many that revel an increasingly oppressive reality in Erdogan’s Turkey – four of his fellow Tümtis activists are also still in jail.

A delegation from the European Transport Workers’ Federation (ETF) and the International Transport Workers’ Federation (ITF) tried today to visit Nurettin inside the high-security prison where he is being held. However, our request was refused by the government, just as happened on an earlier visit. It is clear that Nurettin’s imprisonment is utterly unjust. The ETF and ITF demand his immediate release, and the release of his four colleagues.

Frank Moreels, ETF President, commented on Nurettin’s situation. “Nurettin Kılıçdoğan was simply doing the everyday work of unions around the world: speaking to workers, explaining their rights, and encouraging them to join the union and stand together for better conditions. That’s no crime. But Nurettin was arrested in a midnight raid, subjected to a series of unfair trials, and has now been in prison for over 6 years. Meanwhile his family must cope without a husband and father, and the Turkish union movement faces an ever more difficult environment without a brave and effective activist. The fact we were not allowed to see Nurettin makes us even more unconvinced by his conviction. He must be released.”

Eduardo Chagas, ETF General Secretary, added: “Nurettin Kılıçdoğan and his four colleagues have been victims of a perverse miscarriage of justice, where the rule of law has been broken in order to intimidate and repress legal trade union activities in Turkey. When union activists are imprisoned simply for recruiting members, a basic human right is under threat. That is exactly what is happening in Turkey today. Trade unions are part of a healthy democracy and a fair economy, so workers must be able to organise and represent themselves. Trade unions across Europe and the world stand with our colleagues in Turkey, and we call on the authorities to release all imprisoned trade union activists immediately.”

The attempted visit is part of a four-day mission to Turkey which includes support for a strike and picket line by DHL Express employees in Istanbul and meetings with all ETF and ITF affiliate unions in Turkey. Check out #TurkeyMission18 for more.