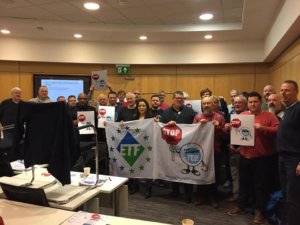 On 17-18 December, ETF Dockers held an Automation and Lashing Seminar in London. We made plans for reclaiming lashing in UK ports, learned more about port automation and how to build the balance of power to negotiate fair automation agreements. With the contribution of ETF President, Frank Moreels, we also talked about our Fair Transport campaign and the consequences of Brexit.

Lashing and automation are vital issues for dockers. Lashing – the fastening of cargo to a ship – is a key part of dockers’ work. Only dockers have the skills to do this dangerous task safely, but many shipowners push seafarers to lash cargo in order to save time and money. This puts seafarers at risk of accidents and eats into their shore leave, while taking away work from qualified dockers already under pressure from port automation.

As agreed in a global agreement between maritime employers and unions, lashing work should only be done by dockers unless otherwise agreed. With our dockers informed and ready to mobilise, we can advance the implementation of this dockers’ clause.

In addition, our automation roadshow team explained the basics of port automation with examples from different European ports. Our aim is to build the capacity of our members to deal with the implications of automation processes on port labour, solidarity and union organising.

Chair of the ETF Dockers Section, Terje Samuelsen summed up the spirit of the seminar: “sustained campaigning combined with effective collective bargaining strengthens our fight to defend jobs and put workers at the heart of automation and digitalisation processes”.