In this article for Transportarbetaren, the magazine of our affiliate the Swedish Transport Workers’ Union, ETF President Frank Moreels argues that wage inequality is dangerous for Europe. Working people and their unions need to take the lead on this issue. In fact, we already are! 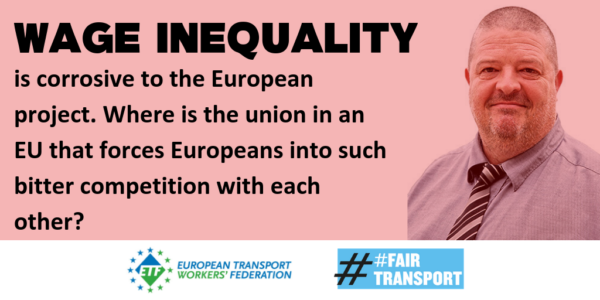 The EU is a huge space of open borders and free flowing trade. The promise was that this freedom would create prosperity for all, and lead to greater equality between citizens of different countries. They call this convergence in policy circles, but it has not yet arrived for workers in the newer EU member states. A recent study by economists at the European Trade Union Institute found that “workers in 11 central and eastern EU countries are paid up to €944 less per month than workers in Germany”. That includes a correction for the cost of living. When we remember that Germans by no means enjoy the highest salaries in the EU, we see that wage convergence is still far from reality. What is more, stereotypes and lazy explanations about low-skilled workers have no place here. The East-West wage gap is even higher when we correct for education levels.

So, what does this wage gap mean for workers? First of all, we have to be nuanced. Wage levels in countries like Portugal and Slovenia show there is no simple East-West narrative. Likewise, we also see enormous inequality inside individual countries. However, it is clear that these huge pay differences in a single market create tension and negative consequences for workers from all regions. This is especially true in the highly mobile transport sector, where the European Transport Workers’ Federation represents more than 5 million workers from all EU member states and many countries outside the EU.

We see the results in trucking, at airlines like Ryanair, and across European transport. Social dumping. Exploitation. Unfair competition. A race to the bottom in wages and working conditions. These are all names for the same process, where employers play with the differences between workers and set them against each other. This destroys jobs in some places and traps workers elsewhere in low-paid work with often terrible conditions. The road transport industry has become emblematic of this situation, partly because jobs are not “offshored” to other countries. Instead we see drivers on contracts from countries like Slovakia working in the West on much lower wages than locals. Their terrible conditions, where they spend months living in the tiny cabin of their vehicle with no access to decent facilities, are plain to see. And they are right next to local drivers at risk of losing their jobs for being too expensive. Frustratingly, the “Slovakian” employer is often just a letter-box company: a micro-office established by a western company purely to take advantage of lower wages and social standards in another EU member state.

This situation is corrosive to the European project. Where is the union in an EU that forces Europeans into such bitter competition with each other? As a wave of disillusion and populism sweeps our continent, we must be careful.

Now workers and their trade unions are taking the lead, harnessing international solidarity to build a positive vision for a Europe that works for workers. Our Fair Transport campaign saw over 100 actions take place in many across Europe in support of our manifesto for decent work in transport. On 27 March a huge demonstration in Brussels marked the high point, and it was wonderful to see friends from Central and Eastern Europe in the crowd. There were especially large delegations from Romania, Hungary and Poland. Workers and their unions must stand together to argue that upwards convergence in wages and conditions is the only way to guarantee the long-term stability of the EU, and deliver on the promises made to citizens of newer member states.

Our work is bearing fruit. The European Parliament has just voted for its position on the EU Mobility Package – a set of reforms to the road transport sector. MEPs have heard our call, and passed amendments that guarantee fair competition, equal pay and decent conditions for all professional drivers. But we need many more decisions like this if we are to close the East-West wage gap and bring true equality and shared prosperity to Europe.