The ETF’s Fair Transport Campaign is picking up speed. Actions across Europe show how strongly transport workers feel about the social dumping and exploitation they face. Now we are taking our vision for dignity at work to EU leaders. It is vital that politicians acknowledge the problems facing transport workers and that they commit to real change. That is why our Fair Transport manifesto sets out the steps that politicians need to take. As European Parliament elections approach, we’re meeting with various political groups to present this vision and gather support for our proposals. 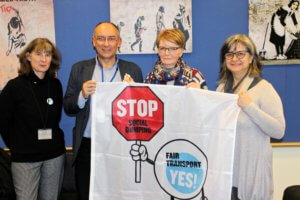 On Tuesday 22 January 2019, ETF General Secretary Eduardo Chagas and colleagues met a group of MEPs and staff from the European United Left–Nordic Green Left (GUE/NGL). Gabriele Zimmer, the German group leader, was impressed by our clear analysis of the link between social dumping and attacks on working conditions. The group also agreed with our approach: building a movement of solidarity between workers from many countries and sectors. This is not an East – West dispute: our campaign is about ensuring all workers across Europe have the same rights.

“A strong European Parliament can be a powerful voice for workers in the EU and neighbouring countries – but only if MEPs make decent work a priority,” said Eduardo Chagas, ETF General Secretary. “I’m pleased that the GUE/NGL group is engaging with our proposals, because transport workers urgently need politicians to understand how social dumping affects their daily lives. Our Fair Transport Campaign brings that message, and we’ll campaign hard to raise transport workers’ voice with politicians from all parties and regions of Europe!”

At the end of the meeting it was agreed that MEP Paloma López Bermejo of Spain will report on our campaign and manifesto to the whole GUE/NGL group. We are sure many will want to endorse our vision and commit to defend the rights of transport workers. We look forward to speaking further with MEPs from GUE/NGL in the coming months, as we also meet with other groups in the European Parliament.