The Slovenian Ministry of Infrastructure’s proposal to change the “Public road transport law” and abolish compulsory taximeters in on-demand transport is causing uproar amongst unions who rightly see it as a mere attempt to allow multinational ride-hailing platforms to enter the market.

The government promotes the changes as a modernisation of the on-demand passenger transport in Slovenia. But multiple reports around poor working conditions of platform workers and a growing number of court cases condemning platform companies’ bogus self-employment practices in Europe prove otherwise. And ETF’s recent Manifesto for Fair Platform Work shows that the gig economy’s disregard for labour rights run far and wide.

So why isn’t it a good idea for Slovenia to welcome ride-hailing apps?

Slovenian law already makes it possible to have digitalised taxi services. The only difference is that the new law will banish taximeters and cause insecurity among passengers and drivers.

Uber and similar ride-hailing platforms base their business model on precarious working conditions and denying their workers basic rights like sick leave. In numerous countries, the apps lost court cases and were ordered to reclassify their ‘independent contractors’ into workers or employees, depending on the labour law in place.

SDPZ has voiced concerns that the government has not properly analysed the proposals’ social dimension. Taxi drivers in Slovenia are already paid poorly, so introducing ride-hailing companies to the market will further decrease earnings with drivers having to work longer hours to make ends meet.

The platform model doesn’t only incur a social cost but also monetary costs to society as a whole. Their model based on bogus self-employment avoids paying the employer’s share of social contributions and VAT. For example, California’s Department of Industrial Relations estimated that worker misclassification costs the state $7 billion in revenue annually.

Monopolisation of the market

Slovenia is a relatively small country, which leaves little space for competition. It is easy to imagine that a ride-hailing platform like Uber will try to take over the market through aggressive marketing and cost dumping – a strategy that they have carried out in numerous countries.

If the market becomes monopolised by one player, then that player will practically carry out public services while being out of regulatory oversight. One should not forget that Uber explicitly stated in its stock market prospectus that its growth depends on its ability to compete with public transport.

The gig economy and its denial of labour rights is a reminder of a time when labour laws were not in place, and going back in time is certainly not “modernisation”. ETF’s recent Manifesto lists necessary conditions to ensure that platform work keeps up with the modern labour standards.

The ETF firmly supports SDPZ and other Slovenian trade unions in opposing the proposed changes. We call on the Slovenian government to withdraw the proposal and engage in discussion with the social partners on the challenges of platform work. With Slovenia taking over the EU Council Presidency later this year, we expect them to implement EU priorities – social fairness being one of them. 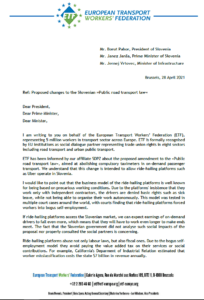