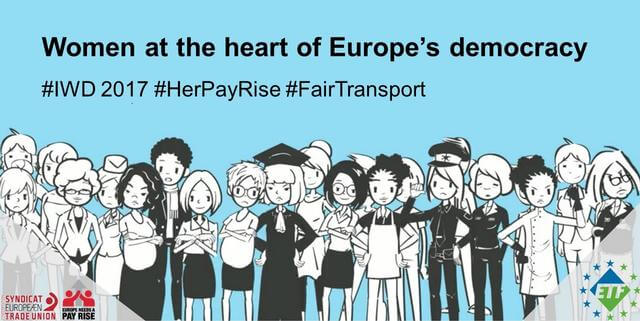 8 March 2017 marks the International Women’s Day and the European Trade Union Confederation (ETUC) calls for narrowing the gender pay gap and boosting the economy via its Pay rise campaign.

ETF supports ETUC’s call for a pay raise and in particular for women, which would narrow the gender pay gap, and boost the economy by giving millions of working women a decent income. This could be achieved by:

In the meantime the European Transport Workers’ Federation (ETF) is in full swing organising its Women’s Conference, to take place on 23 May 2017 in Barcelona. More than 100 union leaders and women transport workers from across Europe will gather together to take stock of past achievements and look into the future gender equality activities. The conference will also promote fair transport and fair working conditions, which will be the key element of the ETF Gender equality work programme for 2017-2022 entitled “Fair transport in Europe, fair jobs for women”.