Mobilisation against anti-union practises in Turkey 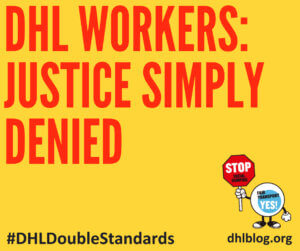 Since 2012 ETF/ITF Turkish affiliate Tümtis has been fighting DHL to get recognition, the first hurdle was taken in 2013 when after 476 days on the picket line, Tümtis was finally recognised after successfully organising DHL Supply Chain.

In 2016 Tümtis started organising the DHL Express division and recruited the majority of the workers.  According Turkish law 40% of the total workforce is needed to get formal trade union recognition.  According that very same law, as soon as this recognition is confirmed by the Ministry of Labour, negotiations must start unless objection is made in court.

Tümtis obtained the formal recognition but DHL Express filed an objection on 8th March 2017.  This is a tactic used to prolong the overall process whilst increasing pressure on individual workers through dismissals, discrimination, mobbing and suppressing the organising drive.  This process can go on for years.  The hearing in court was on the 5th June 2018.

The result of the action day can be followed on the blog – http://www.dhlblog.org/

This is justice for DHL workers in Turkey

ETF and ITF write to DHL Global HR Jutta Rawe-Baumer to insist that DHL Express Turkey must honour the court decision and recognise Tümtis’ right to bargain on behalf of its members.