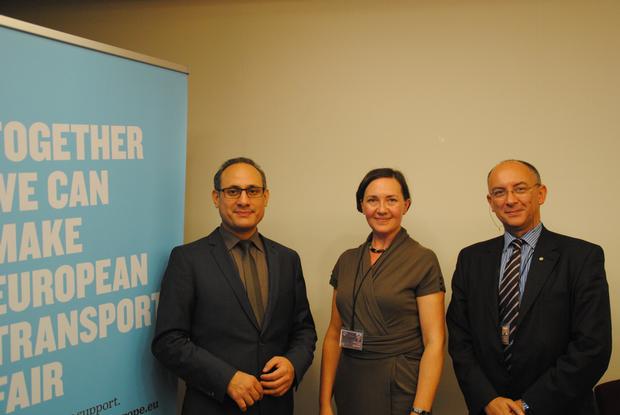 Setting the scene for debates and presentations, in his opening remarks Ismail Ertug pointed out that the main reason for the current problems in the road transport sector is the lack of law enforcement across the EU. “The proposal by the ETF completely conforms to what the Social Democrats in the European Parliament have criticised for many years: We do have comprehensive legislation in road transport, but it is not sufficiently enforced. The reason for this deficit stays partly with the European Commission, for not putting enough pressure on the Member States for a full and complete implementation of Community rules. On the other hand, Member States either do not implement legislation correctly, or are not ready to provide the necessary personnel and equipment to ensure thorough enforcement and controls. While at the EU level we are already discussing cross-border enforcement or exchange of information on infringements, some Member States still struggle to do this within their own regions”.

The ETF stressed once again on the problems faced by the EU road haulage market. The sector needs an urgent rehabilitation of its ‘social’ behaviour, as well as a fair climate of competition between haulers. Social dumping and cutthroat competition have made the sector totally unattractive for potential new-comers, and have led many road operators out of business.

Eduardo Chagas, ETF General Secretary said: “Today, Member States and key players in the road sector urge the European Commission to adopt effective EU-wide measures to address the real problems of the haulage transport. The ETF concept presents precisely that: a set of harmonised measures which can be adopted easily and without delay – no need for amendments in the existing law – to tackle unfair competition and social dumping. We hope that the European Commission will take this into account, and that the European Parliament will support the ETF in its effort to promote the enforcement proposals.”

The event is one in a series of activities meant to promote the ETF set of enforcement proposals. The ETF envisages various meetings with European Commission services and, in the near future, will seek to organise concrete actions involving the European Parliament and the Member States.