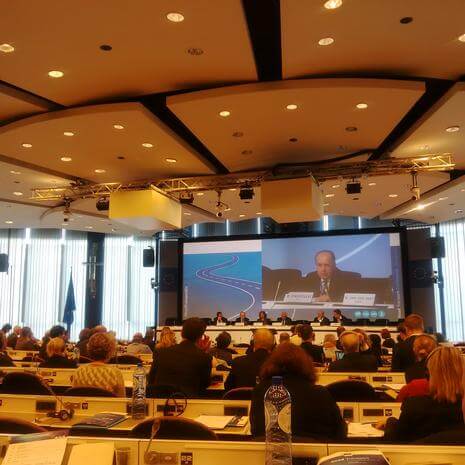 On 19 April 2016 the European Commission (EC) organised the much-awaited Road transport conference offering social partners and other stakeholders to express their opinions on aspects of the future Road initiative. With the initiative the EC aims to revise parts of the EU legal frame applicable to road haulage sector. The ETF participated with a delegation of 13 union representatives from Belgium, Germany, the Netherlands, Spain, Sweden and UK.

The opening addresses of Commissioner Bulc and MEP Michael Cramer, President of the European Parliament Transport Committee, produced hope that social aspects will remain at the core of the future EC Road initiative. Commissioner Bulc stressed that trade unions must be part of the process and that the EC proposal will also aim to improve the working and living conditions of professional drivers. Mr Cramer called for a much more sustainable road transport sector and expressed a strong commitment to address social dumping, unfair competition in the sector and the expanding letter-box company phenomenon. “Why wait 20 years for the mandatory introduction of the ‘smart’ tachograph on all vehicles engaged in international transport?” said Mr Cramer referring to the new tachograph generation as the key tool to control cabotage rules and to determine the labour rights applicable to international drivers.

The overwhelming majority of speakers and participants were hugely in favour of improved enforcement of the current rules, with only minimum changes – if at all – to the current EU legal frame applicable to the sector. Most were of the opinion that rules such as cabotage and combined transport, weekly rest, application of the Posting of Workers Directive in the context of road transport need clarification, while criteria for company establishment must be tightened up.

The ETF is for better law enforcement to fight illegal practices

Throughout the debates, the ETF delegation contributed with clear proposals with regard to all the above aspects.

“Discrimination between workers based on nationality as regards employment, remuneration and other conditions of work and employment is forbidden by the European Treaty. The Rome I regulation and the Posting of Workers Directive were adopted to specifically prevent this type of discrimination. All these Treaty and legal requirements must once and for all be correctly applied and controlled in road transport”, said Roberto Parrillo, ETF Road Section President.

“Weekly rest away from the vehicle is a ‘must’ and cannot be part of the discussion”, said Adrian Jones from Unite the Union. He stressed that two solid weeks of sleeping in a lorry cabin as allowed by the current rules, is beyond any acceptable rest conditions in modern Europe. The law must be clarified and clearly state that weekly rest in the lorry is forbidden.

The ETF once again drew attention to its set of proposals for better law enforcement in the haulage sector, as the answer to effectively fight illegal practices in road transport.

An event leaving too much ‘up in the air’

The ETF appreciated the Commissioner’s vision for transport, particularly as she placed workers in the centre of it. Also to be much appreciated were the open debates. The conference conclusions were short in summing up most of the opinions expressed during the event and were rather weak. Eight months away from the launch of the road initiative no new elements were addressed, no clear date for the launch of consultation procedures was announced, no clear information on the consultation timeline and the topics subject to it. While the ETF and the IRU are preparing negotiations on a social code tackling aspects of weekly rest, regular return home and application of posting of workers to road transport, the European Commission did not make any remarks on a possible intention to link the consultation process for the road initiative to a potential social partner agreement.