THE WAR MUST END NOW

Today, on International  Women’s Day, the ETF Women‘s Committee stands in solidarity with all our sisters affected by the attacks on Ukraine. We stand with all women and their children fleeing their homes, seeking refuge in neighbouring countries.

We join the global labour movement and the international community in condemning the war and call on all parties to adhere strictly to international humanitarian and human rights law. This conflict must stop now. Today and every day, we call for an end to attacks, for peace, dialogue and justice.

The ETF Women’s Committee is particularly worried about the women and girls remaining in Ukraine and the women and girl refugees. War always has a gender dimension. Too often, we have borne witness to gender-based violence in wars and in conflict zones.

An overwhelming majority of Ukrainian refugees that seek safety in neighbouring European states and beyond are women and children. Women and girls are particularly exposed to gender-based violence among refugees and people otherwise displaced from their homes.

It is of utmost importance to secure a gender-sensitive response to the Russian invasion of Ukraine that safeguards the fundamental human rights of Ukrainian women and girls in all their diversity.

Furthermore, we know that transport workers are particularly under threat. We have received confirmed and unconfirmed reports of the military targeting of transport infrastructure, the change of control of airports and railways, and the shutdown of airspace and ports.

Our heart is with our sisters working in transport. And we stress how important transport is to secure humanitarian aid, support with medicine, food and ensure refugees reach safety.

We stand together with our sisters and with all the people of Ukraine, Russia and neighbouring countries, calling for peace, dialogue and diplomacy.

To this end, the ETF Women’s Committee urges leaders on all sides to urgently de-escalate the conflict to minimise the threat to civilian lives and livelihoods and seek a peaceful, diplomatic end to this war.

The war must end now! 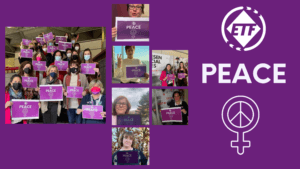 ETF Women’s Committee stands together for peace in Ukraine