ETF Head of Maritime, Estelle Brentnall, is no stranger to trade unions. She’s been working for them in various roles since 2004, moving from ITF to EFFAT, and finally ETF. She joined the ETF team early March 2020, right before the COVID-19 pandemic shook up the planet.

Seven months later, we check in with her to discuss the expectations, the reality of this extraordinary year, and the upcoming priorities for the maritime team. The position of Head of Maritime was created in line with the ETF aim to foster cooperation between water-borne sectors. Being the first person to hold the position of Head of Maritime, Estelle reflects on how that, in itself, was a significant change: “For the team, the organisational change was already a big development. I knew I had to bring positivity and direction and still creating this sense of safety in this situation of change.”

And then COVID-19 hit, introducing unexpected challenges to transport workers around Europe, with severe effects on the European trade union work as well. However, says Estelle, in a certain way, “the crisis brought an increased sense of purpose that carried meaning for the team: helping our affiliates in this time of uncertainty and complexity. COVID-19 arrived simultaneously with my taking up the office, and then careful coordination and collaboration, engagement with the team was a necessity. The team has worked hard the past months and has thereby managed to find ways to adapt to the new situation and still deliver for our members as much as possible. I have certainly found out that it is a privilege to work with such a team.” 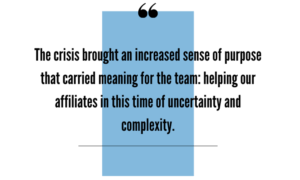 With the internal challenges successfully resolved, the team has been focusing their energy into supporting the ETF affiliates. Workers in waterborne transport have been facing an array of challenges these past months, with seafarers most visibly exposed to the effects of the crisis. “There are problems with repatriation and crew changes, leading to a reduction of manning levels, additional responsibilities being required of the workers beyond their normal duties, increased physical and mental pressure and fatigue. Taken together, this is an explosive situation that could lead to threat to the safety of lives and ships at sea and threat to the marine and coastal environment. Crew members have stayed longer on board than legally allowed, leading to fatigue and psychologic stress issues, since they have not been allowed to disembark and to return home. Moreover, the denial of shore-leave and medical assistance in some cases have aggravated the already stressful situation.” 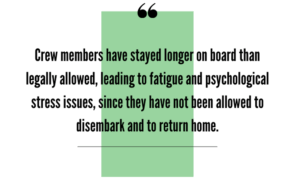 With some of the seafarers unable to leave ships, on the other side of the story, we find workers who, for the same reasons, have been unable to access their places of work. This is the cause of a worrying “loss of income and jobs opportunities for crew members in maritime transport, fishing and inland waterways which couldn’t join their ships,“ explains Estelle. The problem is especially pronounced for “fishermen, who in most countries are paid a low minimum wage, with the rest of their income being based on a share of the catch or on bonuses.” Last but not least, there are port workers, who have “also taken the brunt of the crisis, working around the clock to ensure essential goods are dispatched.”

While everything mentioned so far requires immediate attention and action, it also points to some broader, long-ignored issues that should make us rethink the entire workings of the maritime industry. As Estelle points out, “The COVID-19 crisis has shown that maritime transport workers require special attention. It has highlighted the complexity and the precariousness of a global industry with unfettered mobility of labour and capital, and in particular flag States which have not adequately assumed jurisdiction over the social matters concerning their ships. From the fundamentally mobile nature of inland waterways’ crew members, fishermen and seafarers’ work and the risk for workers to fall between the cracks, more social protection, not less, is needed.” 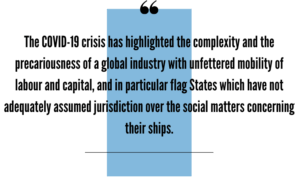 Living in a time of a global pandemic, positive surprises can be few and far between. Still, Estelle has found that despite her extensive experience of working with trade unions, it has surprised her how “solidarity and the power to effect change” never fail to show up in maritime trade unions. “With the COVID-19 pandemic, one could have expected less cohesion, a more inward-looking approach. To the contrary, the crisis has revealed how united maritime unions are and committed to making a difference in maritime transport workers’ lives through mobilisation and struggle.” 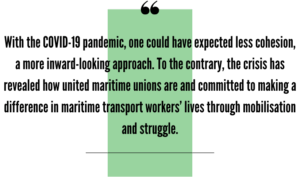 When it comes to future plans, ETF Maritime team’s focus is on “getting through the ongoing crisis, securing an employment-centred response and recovery and campaigning for maritime transport workers’ rights are the top priorities.“ These goals should guide the long-term recovery plans, too, adds Estelle. “The waterborne transport sector is reliant on skilled workers and the support of excellent professionals. The sector’s policies need to be defined within the context of a broad and long-term socio-economic agenda. To be sustainable, any recovery strategy which would entail financial or other support to companies in waterborne transport that are heavily affected by the lockdown should include social and environmental considerations. This is what we are currently and in the future focused on: fair working conditions and fair competition, through campaigns looking into challenging maritime subsidies’ policies, investments in safe and resilient transport infrastructure, new technologies, education, training and life-long learning, and last but not least meaningful social dialogue.” 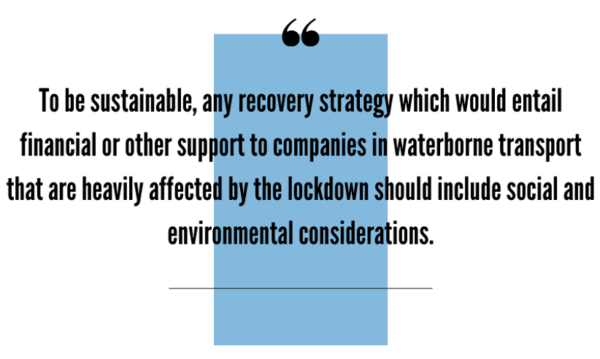