Svitzer workers strike in The Netherlands – their fight is our fight!

The Dutch colleagues sent us the following update on the dispute.

In Amsterdam the unions FNV Havens and Nautilus do still have a dispute with Svitzer Euromed (Svitzer). In addition to the article in Lloys List a couple of weeks ago, I would like to explain the background.

In 2013, Svitzer was in Amsterdam (and Bremerhafen) in financially bad shape. In order to avoid the worst, the crew accepted a new working schedule that meant working on average 8.5 hours extra per week, without extra payment for these hours. This deal was part of a new, five years lasting CBA. This CBA expired per December 31st, 2018. In the negotiations with Svitzer on a new CBA, the unions claimed that the time has come to pay also for the extra hours. The financial situation of Svitzer has improved a lot and there is no need to continue the arrangement that was made in times of crisis.
This repair hasn’t to be done at once per January 1st 2019. The unions have also proposed to build up the payment for the extra hours in four years time. This means that we’ve asked to raise the wages 4 consecutive years with 4% per year. Svitzer however, refuses to listen to this reasonable proposal. Even a 2% wage increase was considered as too much.

The membership of FNV Havens and Nautilus International (together almost 100% of the 63 crew members) has decided unanimously to take industrial action. They have organised four work stoppages up till now and we fear that more and longer stoppages will be necessary to make Svitzer management change their minds.

Svitzer is operating with seven tugs in the port of Amsterdam and is there cooperating with the not unionized tug company Iskes in a joint venture called PTA. Svitzer operates also with one tug in the port of Rotterdam. There they cooperate with Multratug and Fairplay to provide the capacity needed for the Svitzer contracts in Rotterdam (mainly with Maersk).

We hope this explanation is clear for you, but we are always willing to answer questions you might have.

Any sign of solidarity from other Svitzer crews is welcome to us, of course. Perhaps you could come with suggestions on what you could do to support our members in the dispute. 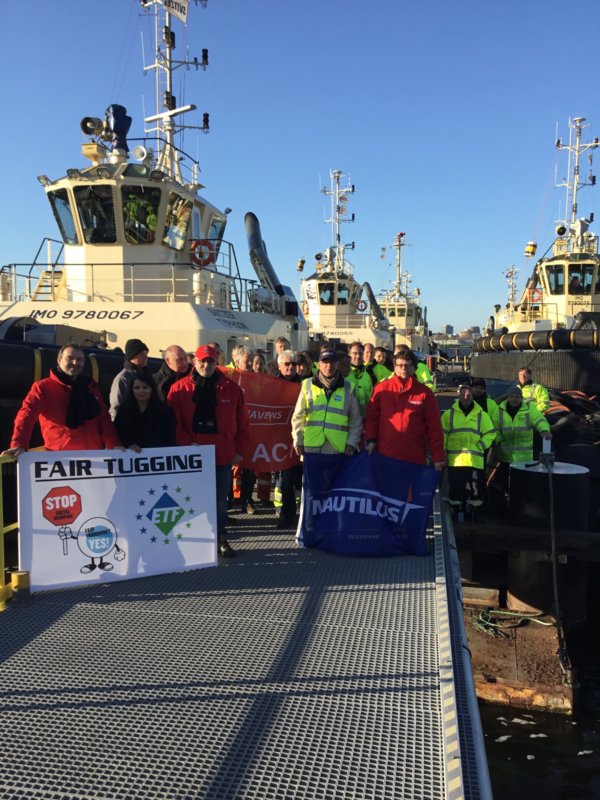 Despite the actions undertaken in the recent days, the Svitzer workers from The Netherlands are forced to strike today since the company refuses to have meaningful negotiations on legitime pay rise and better conditions for tug workers.

The whole European tug sector is trying to decrease towage costs as much as possible to offer better prices to the shipping companies and to satisfy the greed of shareholders. But once again all this, in the management intentions, has to be paid by the ones who concretely perform the towage operations: the workers.

This downward spiral has to stop in The Netherlands and everywhere else in Europe and beyond! The tug workers from all over Europe stand together to oppose this race to the bottom that eventually will risk to jeopardise safe towage operations in a dangerous and delicate environments such as ports.

A solidarity letter to the Dutch colleagues was sent by the FOMM UGICT CGT (France).