Tomorrow, Transport Ministers will meet to discuss the future of EU rail. Ahead of their meeting, in a letter, the ETF underlines the lack of decent jobs, which is driving workers out of the industry and warns against the European Commission’s push for liberalisation.

Climate goals cannot be reached without workers willing to work in the rail industry:

In France, SNCF is missing 10% of the number of workers needed for a smooth operation of services including 1200 train drivers; in the Netherlands, NS currently has 2200 vacancies, and in Austria, ÖBB needs to attract 3000 new workers per year to continue services.

These shortages are due not to a shortage of workers, but to a lack of decent work.

Lack of job security and decrease in salaries under the pressure of privatisation are steering rail workers away from the industry.

ETF recommends prioritising the working conditions of railway workers in policy decisions and allocating sufficient funding to publicly owned railway companies to enable them to hire more staff, providing them with decent conditions.

Unfortunately, the push for competition between companies to acquire rail lines has led to competition on the backs of workers:  who can offer the lowest working conditions for the cheapest price? EU transport ministers must ensure that such competition on social standards is stopped and forbidden.

On the contrary, the ETF sees clear potential in cooperation between publicly owned railway companies, both at national and international levels, to provide high-quality services, as has, for example, proven successful in Switzerland. Directly awarding public service contracts to publicly owned companies can provide better quality services for users and protect working conditions for staff.

Nevertheless, the European Commission is pushing for more competition, as can be shown in their attempt to revise Public Service Operations (PSO) guidelines to prioritise competition. The Commission’s very own Adina Valean, EU Transport Commissioner, is threatening Member States who intend to extend direct awards to publicly owned rail companies instead of opening up their market to competition and liberalisation with infringement procedures as laid out in her letter to Dutch Minister for the Environment, Vivianne Heijnen.

There is much to be solved in the currently fragmented rail industry if rail is truly to become the backbone of a sustainable transport system – ETF calls on EU Transport Ministers to pay heed and meet with us, the voice of almost 700,00 rail workers to discuss the way forward.

ETF’s letter can be found here and at your right. 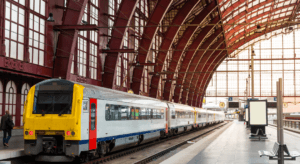