Ukrainian railway workers have our support as they rally in Kiev for safety, fair contracts and decent pay 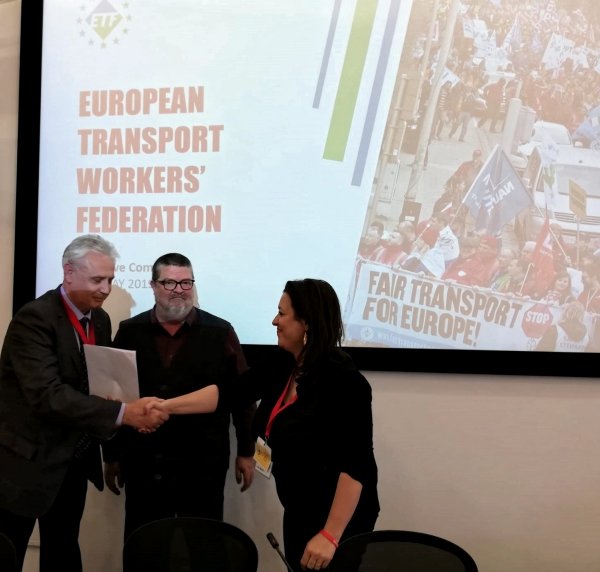 The European Transport Workers’ Federation has given its full support to seven demands made by the Trade Union of Railwaymen and Transport Construction Workers of Ukraine (TURTCWU – Профспілка залізничників і транспортних будівельників України). The TURTCWU is calling on the government to respect the collective agreements of the railways and take urgent action to maintain the Ukrainian railway system.

On 14 May, the workers of the TURTCWU rally in Kiev to make their demands heard. Our Executive Committee of 9-10 May approved an emergency motion calling on the Prime Minister, President and Chairperson of the Verkhovna Rada to esnure that the TURTCWU’s demands are met, and we sent signed letters to this effect to all three leaders. Then, on 13 May, our President and Acting General Secretary, Frank Moreels and Livia Spera, send a message of solidarity to the TURTCWU and their President Vadym Bubnyak.

“We would like to express our support to your mass demonstration on Tuesday 14 May 2019 convened due to the non-respect of the current Sectoral and Collective Agreements by the JSC “Ukrzaliznytsza”. The fact that your union is able to organise such a great mobilisation is a proof of your strength.

The ETF Executive Committee, after hearing an extensive report from our Ukrainian affiliate, decided to fully support the seven claims addressed to the Ukrainian government, Parliament as well as the President of Ukraine and corresponding letters bearing the signatures of all EC members present were sent to them. And we are determined to support you further if needed!

The fight for fair working conditions and against social dumping is at our very heart. Over the past two years, we have run the Fair Transport campaign which culminated on 27 March 2019 with a big demonstration in the streets of Brussels. But the work if far from being accomplished – we need to make sure that every transport worker has a decent wage and decent working conditions, be it in Belgium or in Ukraine. This is also why our hearts will be with you tomorrow.”

Solidarity messages for Ukrainian workers (May 2019)