Low-cost airline Norwegian Air has recently started a bankruptcy process for its Irish branch Norwegian Air Resources ltd which will directly affect its workers in Italy, effectively shutting down the base in Rome. Despite the devastating consequences of this decision on the Norwegian employees in Italy, management failed to share their plans or engage in open and transparent discussions until all the decisions were made.

Out of the blue, unions were then informed last week that Norwegian bankruptcy process has already started. Workers’ representatives were told that from now on, they’d only be able to speak with court-appointed liquidators on Norwegian-related matters and not Norwegian management. Management didn’t even take the time to join the meeting where unions were informed of all the changes.

Norwegian employees – that the company “lovingly” calls Red Nose Warriors – have had enough. Throughout 2020, the company has used them for publicity purposes and hailed them as warriors, only to now put their destinies in the hands of liquidators and Irish courts without any notice or consultation.

“Should the restructuring process – that includes keeping the Short Haul operations only – be approved by the Irish judge, then the company is going to be supported by new investors and also by the Norwegian government, whilst the Italian crew members will be left behind, in the middle of a pandemic,” said Nicholas Dormia, a Norwegian worker and FILT-CGIL member based in Rome. “The company won’t even take advantage of the welfare programs available in Italy to protect the workers’ income.”

Norwegian workers in Italy refuse to become Norwegian’s #RedNoseVictims and have called for a protest in Rome today.

The ETF stands with Italian transport union federations FILT-CGIL, FIT-CISL, and UILTRASPORTI and joins their call to Norwegian and Italian authorities to support them in making Norwegian take responsibility towards their employees. Norwegian must take advantage of the welfare tools available in Italy to support workers during this unprecedented crisis for the industry, instead of leaving them behind as if they were never part of the company. 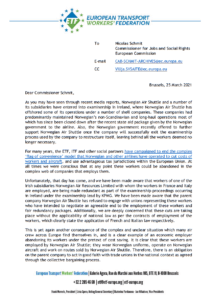