Ryanair has long had a problem with the way it treats its workers. That is why trade unions across Europe, coordinated by the ETF and ITF, have been running a campaign for better conditions and collective representation at the budget airline. After a wave of strikes in 2018 the airline signed its first agreements with unions, and it seemed like the shocking treatment of hardworking staff might soon be over.

Now Ryanair has unveiled plans to move cabin crew and pilots from Ryanair in Germany, Italy and France onto contracts with the new subsidiary Malta Air. This is part of a general move whereby Ryanair will become a holding company with various subsidiaries in European markets including Laudamotion in Austria and Ryanair Sun in Poland (soon to be rebranded Buzz).

We are concerned that this approach could enable Ryanair to back out of its promise to improve conditions, negotiate with unions and work towards more mature industrial relations. Trade unions across Europe recently pledged to continue their campaign for decent conditions at Ryanair, no matter what form the company takes. We call on Ryanair to provide assurances that the launch of Malta Air will not undermine any of the existing collective agreements recently agreed.

We are also engaging with governments and regulators to prevent a slide back into Ryanair’s bad behaviour. This week we took our message to the Maltese government. On 2 July 2019, in a meeting with Ronald Mizzi, Permanent Secretary at the Ministry for Tourism, we presented the concerns of ETF and ITF. Mr Mizzi promised that he would to look into how this new deal could impact the workforce, and investigate the legal framework. He also insisted that Malta has a robust legal framework to protect workers’ rights, but issues around Maltese Flags of Convenience in the maritime sector show that this is not always the case. We call on the Maltese government to act in good faith over the coming months, ensuring the Malta Air is a creator of quality employments and not an instigator of social dumping against unionised workers in other countries. 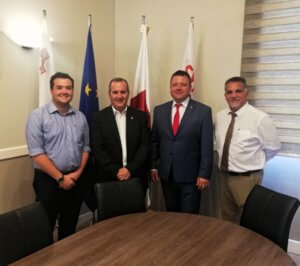 Ryanair workers and their unions around Europe will be vigilant and ready to respond to any attacks, in Malta or elsewhere, on the recent progress towards better conditions. International solidarity is at the heart of our Ryanair campaign, and this meeting would not have been possible without the active support of our affiliate General Workers’ Union – in particular General Secretary Josef Bugeja and the Secretary for the Aviation and Maritime Sections Sandro Vella.