Lithuania’s trade unions are nothing if not fighters. From defending exploited third-country nationals to standing their ground when the government attacks workers’ rights – our unions have had their work cut out for them.

But the issues trade unions and transport workers face are not just Lithuanian but European and therefore require a European solution.

An ETF delegation visited our trade unions in Lithuania to directly engage with the heart of the problem, national policymakers and bring key issues to their attention.

In road transport, 70% of third-country nationals enter the EU through Lithuania and Poland.

Of the thousands of registered drivers – only 7% are actually Lithuanian.

What’s interesting, though, is that these trucks never drive on Lithuanian roads. Instead, the drivers behind the wheels of these trucks spend all their time in Western Europe transporting goods. Completely illegal, of course, because the Mobility Package stipulates that drivers should either go home every three weeks or back home; thus, if they had been admitted by Lithuania, home is Lithuania where they are supposed to have their residence. In reality, these drivers never go “home”, and the lack of road enforcement all over Europe means other countries seldom check, making this a very European problem.

Here, the ETF aims to trigger a dialogue between countries and ensure they cooperate with the European Labour Authority. The Mobility Package’s lack of enforcement is a widespread issue in Europe.

In aviation, Lithuania is establishing itself as a flag of convenience for the sector, housing many companies with questionable social practices. They are allowing companies to come in and exploit European labour across Europe’s airspace.

Today, the largest ‘wet leasing’ companies in Europe are based in Lithuania in order to have advantageous tax and social rules applied to them. These companies take part in traditional social dumping – they hire cheap labour on non-EU contracts and export it across Europe, exploiting their staff and undermining fair competition across the industry.

What makes it worse is that these ‘wet leasing’ companies directly replace the flights of airlines with decent social standards, with the same flight number and sometimes even the same colours. Passengers won’t know they are being kept safe by the exploited crew until they are already in the aircraft.

Similarly to other European countries, public transport workers are neglected. Since 2018, the capital’s public transport workers and their unions have been trying to negotiate a new collective bargaining agreement. For this very reason, workers have been on strike since December 5. Unfortunately, this case is not isolated: All over Europe, unions are taking action to force employers back to the negotiating table. Public transport is underfunded, and salaries do not allow workers to cope with the cost-of-living crisis. With booming energy costs and the climate emergency, people are increasingly turning towards public transport as a solution. But a green transition can never be achieved without the workforce and public transport investments.

As a Baltic country bordering Russia, whose transport sector mainly serves the Russian market, Lithuania has not been spared by the effects of the war. The rail industry and its workforce suffer from trade sanctions on Russia: 2/3 of cargo transports have disappeared. As the sector relies on income from cargo transport to maintain the infrastructure, its financial sustainability is in jeopardy. As a result, a significant part of the workforce has already been laid off, with likely more redundancies in 2023 and no support measure directed to the workers in sight.

Talks with ETF’s unions from Lithuania, Latvia and Estonia revealed that if a solution is not found soon, the sector may never recover, as a whole generation of rail workers could be lost. A solution could be the Baltic Railway Corridor as part of the TEN-T network, but the human aspect of this project is neglected. ETF’s unions have exchanged with the coordinator of the Baltic-North-Sea corridor, Ms Trautmann, to discuss their concerns and urge her to involve trade unions in developing this network.

ETF’s unions are taking political action to solve these issues, but common European solutions can be found, especially in the enforcement of EU rules and the coordination of oversight across the EU.

During the visit, ETF met with the Vice-Minister of Social Security and Labour and representatives from the Ministry of Transport and Communications.

The ETF will continue to work towards activating dialogue between countries on common issues and support our unions.

This visit took place with the support of co-financing from the EU. 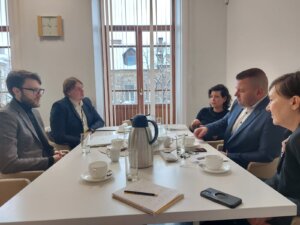 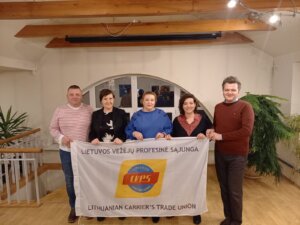 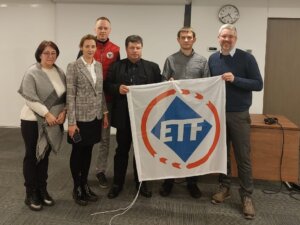 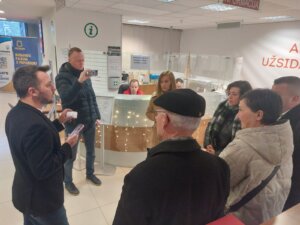 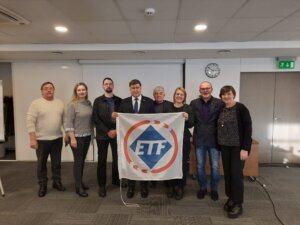