On 24 February 2022, the world was shocked and saddened when the Russian Federation attacked Ukraine. While defences were mobilised, and women and children fled regions under attack, transport workers continued to do their duty. Rail workers kept the trains moving, transporting people to safety and goods to where they were needed. They put their own lives at risk during bombardments and deliberately targeted shelling to maintain the essential service for their often-traumatised passengers. Meanwhile, seafarers feared for their families at home, many from port cities under occupation or destroyed completely by the aggressor. And dockers kept essential supplies moving in and out of Ukraine.

Many transport unions around the world quickly offered support to their sisters and brothers in Ukraine, and in April 2022, the ETF and the ITF set up a solidarity fund to provide financial support to the Ukrainian affiliates, their members, and their families.

Since the fund was established, roughly £400,000 GBP (around USD 490,000) has been used to purchase humanitarian goods. Generators, solar batteries, propane tanks, heaters, food, sanitary and children’s packages have been distributed among the unions’ members and their families. As many items as possible have been purchased inside Ukraine to assist the national economy, and the remainder was procured in Poland. In addition, the ITF Seafarers’ Trust worked with the Marine Transport Workers Trade Union (MTWTU) to help seafarers’ families to leave the country, organising transportation by bus and temporary accommodation in Romania. A further project enabled 50 Ukrainian seafarer cadets to pursue their studies in Lithuania through agreements with the Lithuanian Maritime Academy and Kherson State Maritime Academy; additional support was provided to students of the Odesa Maritime Academy.

Last week, the unions (MTWTU, the Trade Union of Railwaymen and Transport Construction Workers of Ukraine (TURWTCU) and the Free Trade Union of Locomotive Engineers of Ukraine) invited the ETF, ITF, and ITF Seafarers’ Trust to a solidarity meeting in Ukraine. A small group representing the ETF Management Committee, the ITF Executive Board, and the Trust, including union leaders from Croatia, France, and Lithuania, went to the Zakarpattia region near the Hungarian border and met with the unions.

For two days, the group discussed the unprecedented trials and tribulations endured by the unions and their members during the last year. It was emotional and inspirational to hear how Ukraine’s unions and transport workers have shown strength and bravery in fighting for their country, their families, and their friends. Through it all, they stayed positive and determined for victory and a return to peace in Ukraine. 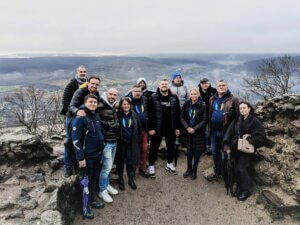 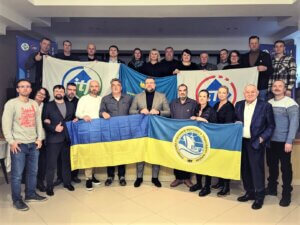 This tragic and senseless war has brought people closer together and strengthened unity. New friendships have been forged, close ties renewed, and it was agreed to redouble efforts to raise funds – not only for immediate humanitarian goods but also for future long-term support. As well as the need for physical reconstruction, it is clear that the psychological scars of war will be considerable and require attention also. The meeting concluded that mental health support, rehabilitation, and recuperation for the children of transport workers impacted by the conflict must be prioritised.

We call all ITF and ETF affiliates to contribute to the solidarity fund during this challenging time for our sisters and brothers in Ukraine https://ukrainesolidarityfund.itfglobal.org/.