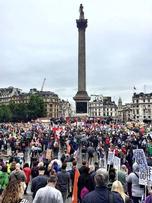 Unions affiliated to the ITF and its sister global union Public Services International (PSI), including Unite the union, the General, Municipal, Boilermakers and Allied Trade Union (GMB) and the National Union of Rail, Maritime and Transport Workers (RMT) were among the unions taking strike action. Teachers, front-line health service workers, and firefighters were also out on strike across the country.

The UK government cuts programme has seen public sector workers struggle on stagnating wages while the cost of living soars. According to Unite, local government pay will soon be outstripped by the national minimum wage. Negotiations for improved pay have ended in stalemate, with public sector workers describing employer pay offers as ‘insulting’.

The RMT was also involved in a dispute on behalf of its members in London. Employer Transport for London is seeking changes to pay and pensions terms and conditions, which the RMT says would see members retire to a life of poverty.

ITF acting general secretary Steve Cotton backed the joint affiliate action. He said: “What’s at stake here are quality public services. Millions of people across the UK rely on public transport, public healthcare, and public education. Workers across the sector do very important, difficult work that keeps the country on its feet – and we must recognise that quality public services cost money. Many workers in the public sector have lived with real-terms pay cuts in the last few years, and others who’ve saved for later life are now looking at retiring to poverty. We back our members all the way in this fight for our public services.”

Read the PSI release on the strike on their website