Our campaign Stronger together. Ending violence against women transport workers aims to raise awareness of gender-based violence in transport, and help trade unions and employers develop better policies that address the issue at company level. At the ETF Fair Transport demonstration in Brussels on 27 March, transport workers from all over the Europe left their mark on a banner in support of our Stronger Together campaign. 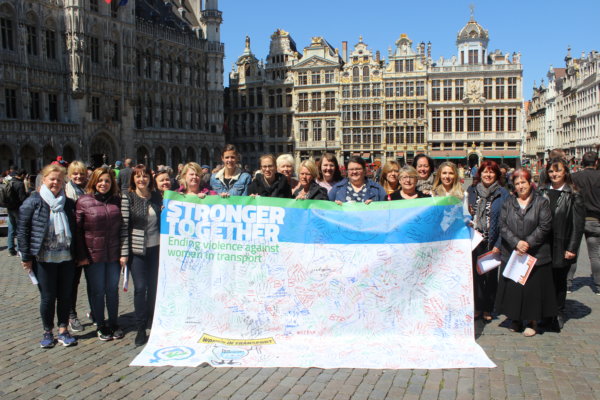 In cooperation with the reputable international researcher Dr Jane Pillinger, we have developed the following campaign materials:

The materials can be downloaded on the ETF campaign webpage. To allow for a wide-spread use of the campaign materials, they are available in 11 languages, as follows:

It is time now to act and take the campaign to the next level. The ETF Women’s Committee thus urges all ETF affiliated organisation to join the campaign and promote violence-free workplaces and fair jobs for women transport workers in Europe.

We urge all ETF affiliates:

The campaign builds on the findings of the ETF survey on gender-based workplace violence in transport which revealed alarming incidents of violence against women transport workers by colleagues, managers and customers: