You may think it must be just a coincidence.

And what an enormous coincidence must be, right? Or how else could we understand that Wizz Air had used the same approach in the case of the founding members of another union, also legally registered by a few of its employees? Only this time, it happened in Ukraine.

The idea of having a trade union to represent the air transport workers within Wizz Air in Ukraine began to be shaped by some of the Wizz Air branch crew members in this country in the spring of 2020. Amongst them, Artem and Yuliia.

Artem Tryhub started to work for Wizz Air as a cabin crew member in April 2018. 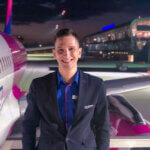 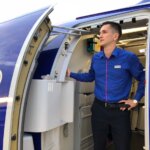 Yuliia Batalina was not only senior cabin crew at the same Wizz branch, but she used to be an ambassador of the company for over four years, until 2019. 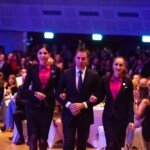 Yuliia Batalina – on the left – walking on the podium together with the Wizz Air CEO, József Váradi – personal photo archive 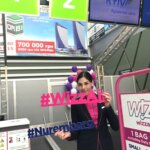 On the 17th of May 2020, the union was legally registered and could start its activity. Although, the management of the company refused to recognise the newly legal union and cooperate with it.

Yet, the activity of the union members has not lasted long. At least not for Yuliia and Artem.

Not only that the management team of the Wizz Air branch in Ukraine asked the Court to dissolve the union, but Yuliia and Artem were amongst the 22 pilots, and crew members who were dismissed in July 2020 due to COVID-19, as the company officially informed them.

If so, why would they let both Yuliia and Artem go simultaneously? After their work within the company was previously appreciated and they were considered trusted employees? Why fire them? It does not make sense, right?

The common ‘point’ for letting go of Artem and Yuliia is pretty obvious: they were responsible for starting the union activity. A union which, contrarily to the low-cost carrier’s intention to reduce it to silence – by contesting its functioning in the Court – was recognised as legally operating in August 2021, in a final and binding decision of the Northern Economic Appeal Court in Ukraine.

So, a good story has, most of the time, a happy ending. Or if not a happy one, at least we find out justice was done for the main characters. Be it a fictional story or a real one.

It happened the same for our two Ukrainian characters in our Wizz Air story, Artem and another cabin attendant from the Ukrainian Union, who prefers not to be named at this point. In December 2021, they both got the decision of the Ukrainian Court of Justice, stating undoubtedly that their firing was illegal. As an immediate consequence, Wizz Air has to rehire them in the same positions – as  crew members – and pay them financial compensations from July 2020 to December 2021.

And so, once again, even in a non-EU country, justice has prevailed.

Yet, the arrogance of the Wizz Air management team, trying to extend the low-cost carrier wings all over Europe, is being once again revealed.

Do you think Artem and his colleague have received an official reply to their requests addressed to Wizz Air’s management to immediately implement the Court’s decision? Well, let us tell you: they have not! At least not just yet.

Nevertheless, we can understand that such a decision is difficult to digest even for a company that continues to expand and aims only for a bigger profit. And its expansion is regularly done at the expense of its own employees all over Europe, but only for the benefit of a few: the Wizz Air management team.

And for those who tend to forget the simple reality of ordinary people, of people working in good faith for them and their companies, just make sure that we speak up for them when they don’t have a voice. And as a trade union federation, the ETF will always stand by them, using all the available legal possibilities to point out the wrong decisions one employer or another is making, directly affecting the life of one or more of their workers. We will stand up for them because they have rights as workers, as employees, not just obligations.